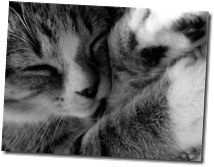 In the last years I have developed an aversion against games that are very rules-heavy. Although Pathfinder looks very sweet, I just can’t see myself any game based on the d20 System anymore (aside from Microlite20 perhaps). I actually bought Fantasy Craft and was amazed by all the fresh ideas they brought into the game, but in the end, I will probably never run it. Back in the day I have ran several Shadowrun campaigns but today I find the rules much too complicated for my liking.

As I have been getting older I have noticed that I have less time for my hobby. That’s why I started to look at rules-light games like Savage Worlds, the D&D retro clones like Swords & Wizardry, Dungeonslayers and the new Dragon Age RPG. Don’t get me wrong, I don’t mind reading hundreds of pages of setting information, but when it comes to rules I want it fast and easy. Am I getting old or am I just lazy. As you grew older have you noticed that you preferred rules-light games or would you run D&D 3.5 with all available classes, feats, optional rules every day?