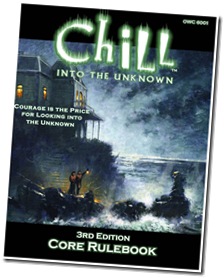 This may be old news to some of my readers, but I just learned about the Quickstart Rules for Chill 3rd Edition. I’ve played Chill a few years back (I think it was the Mayfair edition) and enjoyed it very much, even though my first character ran off naked into the night somewhere in Alaska, never to be seen again. But that’s another story. It was also the first time that I played in a game where the GM made use of eerie music to get the players into the mood. This is a technique I use to this day, sometimes to great effect.

I am not sure if there ever will be a 3rd edition of Chill, because the last news on the official homepage was several months ago. The last thing I heard was that publisher OtherWorld Creations was trying to raise money for the project. Alas the link to the fundraising page is dead and the activity on the Yahoo! group of the project has almost come to a halt in the last months.

The 45-paged Quickstart Rules PDF contains all the rules you need to play a game, an introductory adventure and a couple of pregenerated characters. Since I am a big fan of horror games I might have bought a third edition of Chill, but from the looks of it, the project is dead like a dodo.

Penny Arcade: “For the Vin”