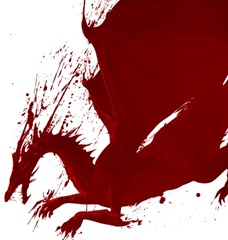 Some days ago Green Ronin finally made the Dragon Age RPG Set 1 available for preorder and offered it as PDF download, too. On top of that everyone one who preorders the boxed set gets the PDFs for free. As I very much enjoyed the Dragon Age: Origins computer game I preordered the boxed set as soon as possible. On the very same day I printed out the PDFs on my laser printer and started reading. And I have to admit, I very much like what I’ve read so far.

It’s a great game for new players to pickup and play
The Dragon Age RPG is a great new game for experienced and new players alike and I am sure that it could help to get more people interested in our hobby. And that’s actually the first reason why I love this game. The rules are very rules-light, almost old-school but presented in a way that even inexperienced players should have no troubles understanding the rules. Character creation is very fast and easy but offers a lot of options for the players. And especially if you have played the computer game you already know what to expect when playing the game. The GM doesn’t have to explain to his players what a Mabari War Hound is, for example.

It feels like an old-school game
When you’ve followed my blog for some time now, you know that I very much enjoyed playing some of the more old-school games like the D&D retro clones, Traveller or 1st edition Warhammer Fantasy Roleplay. And in a way, Dragon Age harkens back to these old-school games. Especially when you read the section about GM “Dos and Don’ts” you’ll notice a lot of tips that sound like they were taken directly from the “Quick Primer for Old-School Gaming”. Special emphasis was put onto the idea that you should challenge the players and not just their characters. And this is very old-school in my book. The rules-lite approach reinforces that old-school feel.

Boxed Set
I love boxed sets! Especially for a game targeted at new players, a boxed set is a must in my book. In this format it’s much easier to provide the player with everything he needs to play, and it looks more like a game to potential customers. It’s a shame that the boxed set will probably arrive a bit to late to make a Christmas gift this year.

Fantasy with a twist
The world of Dragon Age has all the fantasy tropes like elves, dwarves, mages, etc. but with a twist. Elves are not the perfect, immortal beings we know from Tolkien’s work but have been enslaved by humans for a long time and are still second-rate citizens in most places. Dwarves are an almost extinct race and known for their political intrigues and backstabbing. Mages are closely watched by the Chantry and feared and distrusted by the common people. Bioware’s vision of a dark fantasy world is not as original as many other more outlandish worlds but it’s definitely not your garden variety fantasy setting.

If you haven’t already preordered Green Ronin’s Dragon Age Set 1, you should definitely check it out as soon as it hits the stores. And if everything works as planned I should be able to post a proper review later this week. So stay tuned.

Happy New Year–Plans for 2019 and A Look Back