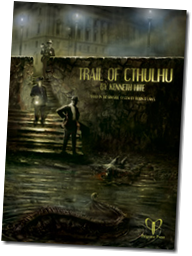 As I’ve written in my “Happy New Year” post just a couple of hours ago, we played “Trail of Cthulhu ” tonight. And it was a blast.

We had a lot of fun and even though I never ran any Gumshoe system game before, it went without a hitch. Alas my players didn’t manage to solve the mystery of the "”torso murders” before we decided to call it a day, but they are all eager to find out who killed all that people and what causes these strange phenomena in the slums of Cleveland.

And not having to make any checks on investigative skills really is a godsend. Playing with almost no skill checks all evening felt a little weird in the beginning, but it actually worked quite well. After a few hours into the adventure we really didn’t think much about it, it felt just natural to us.

There even was a short fight when the investigators defended themselves against one of the suspects. The combat rules in the Gumshoe system are very simplistic but serve their purpose well. And because of the simplistic nature of the combat rules, combat didn’t feel detached from the rest of the game at all. I wouldn’t use the Gumshoe system for any combat-heavy game but it works well in the given setting.

The adventure I am running, “Kingsbury Horror”, is from the back of the core rulebook and a perfect introduction to both the setting and the game. It features a lot of weird phenomenon but it’s actually not a full-blown Mythos story, so the GM can use it to ease the players into the setting. What really makes the story of the “Kingsbury Horror” so disturbing is the fact, that the premise of the adventure is based on a true crime.

Ok, it’s after 4am right now, and I really should go to to bed, so I think I will conclude my post about my experiences with ToC now. If you have any questions to ask or thoughts of your own to share, feel free to do so in the comments below.

A Trek to the Stars but no Star Trek