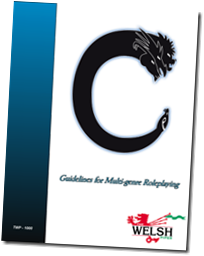 When I opened my mailbox today I noticed that The Welsh Piper has sent its January 2010 newsletter. The most important news is that the Chimera RPG is now available for the reduced price of $12.

The 111-paged PDF contains  the Chimera RPG core rules which allow GMs to run adventures in almost every genre. Some time back I’ve written a review of the Chimera Quick Start rules that you can download for free after subscribing to the newsletter. I still haven’t finished writing the review of the full version, but I can tell you it’s a pretty nice rules-lite game.

If you are looking for a rules-light game system which allows you to run games in multiple genres, you should give Chimera 2.0 a look. If you are not willing to buy the full version, sign up for the newsletter first and give the Quick Start rules a try. You won’t be disappointed!

By the way, you can also buy the the game from RPGNow (RPGNow affiliate link).

Too many games, too little time…