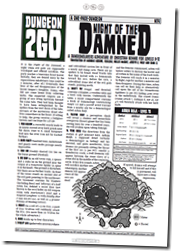 The Dungeonslayers community is still hard working to provide fans all around the world with new one-page adventures. Recently a team of five dedicated fans has translated Christian Kennig’s “Night of the Damned” into English. This adventure is suited for levels 9 to 12 and is available as a free PDF download.

Here’s the blurb from the official site:

Welcome to the newest not-so-dungeony fast food dungeon!
Instead, we want to take you on a leisurely stroll through the Night of the Damned. Idyllic forest lakes and gushing waterfalls await you – gaze with astonishment at friendly abominations and have a boating tour on the side.
Furthermore, we offer the usual bashing and thrashing, lots of loot, innocent evildoers, classical conjurations and depraved machinations. This for levels 9-12, to fend off any complaints.
As always, you’ll find the newest Dungeon-2-Go under Downloads – have a lot of fun!

Even if you don’t play DS, I can recommend you to have a look at these adventures. An experienced DM will have no trouble converting them to any other game system.