The Pathfinder Roleplaying Game has been out for a while, since August 2009, and it’s made me a happy gamer so far! So if you want the short of it there you have it. Interested in a little more detail? Ok read on… 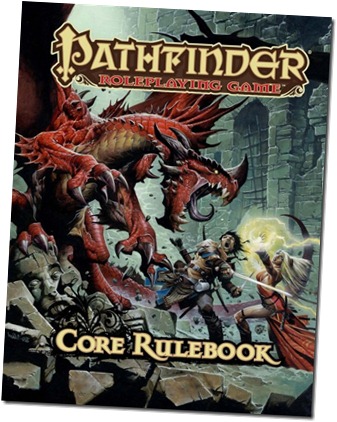 Many people have reviewed the game and I don’t intend to rehash that here. I’ll give you my experience with the game over the last 32 sessions of my weekly campaign. We actually began playing with the Beta Test rules. The publisher, Paizo, carried out a lengthy play test listening to player feedback and fine tuning the game to the likes of the community. Like any endeavor by committee not everybody involved was pleased with the result, but I think the game is better for it.

In case you’ve lived under a rock for the last couple of years, the Pathfinder RPG carries on the proverbial torch for D&D 3.5. While Wizards of the Coast published a new edition of D&D, Paizo attempted to improve on the existing edition. Pathfinder is still a d20 game, close in form and methods to its roots. The complexity and detail in D&D 3.5 are still there and one of the stated design goals was backwards compatibility with older material, making converting material from D&D 3.5 to Pathfinder relatively easy. There is even a Conversion Guide!

What they have improved on are the fiddly bits in the system, details that made some aspects of the game difficult, needless complexities and attempted to “balance” classes. Let me give you some specific examples:

Calculating Skill ranks has been greatly simplified; no more half ranks and the tedium of skill selection when creating a character above 1st level, and forget if this was a multiclassed character! Now you simply put your ranks in skills, if it’s a Class Skill you get +3, no more fuss! There are also no pesky multiclassing penalties, instead characters a pick favored classes and get small bonuses when they select levels in that class. Some skills have been condensed into broader categories and Feat options are expanded and varied.

The classes have been cleaned up, every class has something to offer at every level, and every class has a special ability at 20th level to entice players to stick to one class all the way through. They tried to reign in spell casters, a common complaint in D&D 3.5, by boosting other classes and modifying magic to bring it more to par with other abilities. So there is definitely a power creep in all classes and races which bring them to levels comparable to classes published in later D&D 3.5 books, but I’d be careful when adapting those to a Pathfinder game some might be pretty straightforward, others might require more work, but fans have done a great work of this in the Paizo Forums, so search there for your favorites.

Save or Die spells are a thing of the past, spell casting in combat is much harder, now simply a Caster Level check (rolling against a difficulty and simply adding your level in the spell casting class) which has been the hardest pill to swallow for my players who like to play spell casters. Most combat maneuvers like grappling or disarming that had different rules for each specific instance have been folded into a unified Combat Maneuver mechanic that is easy to follow and makes sense. Creating magic items no longer requires the expenditure of XP and the new costs for creating magic items has worked well so far in my game.

On the Game Master’s side encounters are now created using an experience point budget and it’s easier to build them quickly and include more opponent variety in the mix. Likewise assigning treasure has been simplified and creating and equipping simple NPCs has also been made simpler. Key NPCs still require a little more work, but the run of the mill opponents can be created with ease. Prep time for Game Masters is reduced, it still require some time, but far less than before. There are three different experience tables for those of us that thought characters just went up in level too quickly. 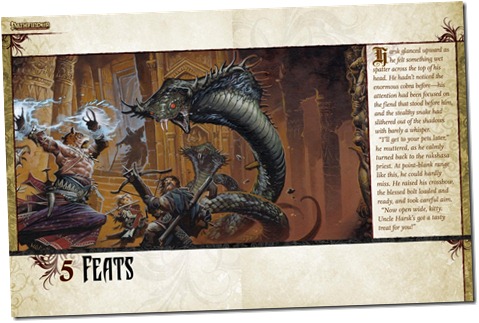 The book is massive, 575 pages big, and combines all the rules for Players and Game Masters. Beautifully illustrated, there is some of the  fantasy-punk art some people hated during the D&D 3rd edition phase, but I an not bothered by it so be aware. The book has some mistakes and the inevitable errata is available for the 1st printing (the copy I own) but nothing that makes the book unusable.

If you liked D&D 3.5 but had some problems with certain issues this game may be for you. If you are a fan of D&D 3.5 and want to see what can be done to improve it, you owe it to yourself to give this game a try. If you want a rules-light game this is definitely not for you. I don’t think this is a game that new players will be able to pick of the shelf and play without some help, it’s not a gateway game, but with help from someone with experience in the game it can be whole lot of fun. I’m actually going to run a demo game for the system this Sunday for players who have not tried it out and some players who have no idea what an RPG is!

The game is OGL and the folk at Paizo have provided a System Reference Document for the game, and the game is available in PDF format for $10 so you can try it out at a reasonable price. The rules for monsters are in their own book, the Pathfinder Bestiary, and while you could play with the older monster books, the reworked monsters are closer to the power level presented in the Pathfinder RPG rulebook. There are also many great third party products available for Pathfinder so it’s a good time to be a Pathfinder fan.  I am confident this system can survive alongside D&D 4th edition and cater to those of us who did not find the new edition to our liking.

My campaign is still on relatively low levels, 6th and 7th, so I have not experienced higher level play, one particularly troublesome area of D&D 3.5 where combat typically dragged on, and one round took forever. So if there is any interest out there I will revisit this topic in a couple of months when my players have reached mid levels.

Thank your for reading and have a great weekend!