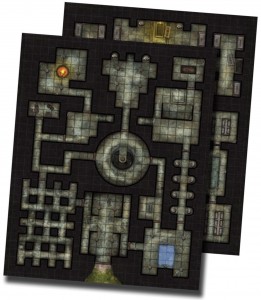 As an avid player of D20 games maps have become an integral part of my games. On a previous post I talked about cheap battlemats and what I use for most of my mapping needs, but these are not my only options, far from it. I own and use other commercially available products for my adventures, Flip Mats, Dungeon Tiles and Map Packs.

On my recent trip to Las Vegas I actually acquired more of these and thought it would be nice to give you my take on these aides and their usefulness. Like a friend of mine likes to say, this is my experience your mileage may vary.

Flip Mats, what are they?

The Steel Sqwire website describes them best, 2 feet by 3 feet laminated cardstock with a map printed on one side and a grid printed on the opposite side. Since they are laminated you can write on them with markers and they erase easily. The maps fold to a small, easy to carry size, making them very portable.

There is a wide variety of Flip Mats available, from forests, markets, keeps and rivers to theaters, dragon lairs and ships. I owe some and I’m always on the look out for new ones. The maps are very nicely done and the details always give me ideas when constructing an encounter around them. Their size makes them big enough for combat in a large area, with many interesting terrain features, but not so large that they become unwieldy.  However, be prepared for the players to step beyond the edges of the map and fill the spaces accordingly. They worked well for the D&D 4th edition game I ran and my current Pathfinder RPG game.

Many of these maps have flip side with a grid printed on then in different colors, green for the forest, stone for the dungeon, allowing you to draw your own maps on them making them even more useful. Some have alternate versions of the image or other details on the opposite side. I personally prefer backgrounds of lighter color for drawings, but they make a very nice surface to use in conjunction with Dungeon Tiles (but more on that on another post!).

Nice as they are and owning as many as I do, you’d be surprised by how little I’ve used them. My initial nitpicks about them were the fact that the creases on the folds make them hard to lay flat, but this I solved by placing them on top of the magnetic erasable boards I use as a battlemat and holding them down with magnets. I think the biggest hurdle to their use is just how nice and detailed they are. Let me explain…

I’ve used both the Waterfront Tavern and Cathedral maps for major encounters in my current campaign. These maps have represented specific locations in cities where the adventurers have had important combats and in my mind the maps have become maps of those specific locations, not generic maps of a tavern or cathedral. I am well aware that I can reuse them for other locations, but for me this shatters the internal consistency of the campaign world. Maybe another cathedral to the same god can have a similar layout, but would every waterfront tavern have the same design? I know this is a very personal decision and that the maps are meant to be used for different locations. 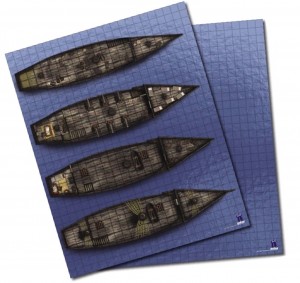 The one Flip Map I own that has been used and reused is the Ship. My current campaign is pirate themed and the map represents the character’s vessel so I’ve gotten my money’s worth. Even the flip side which is a large blue background with a grid printed on it has seen frequent use.

After what I’ve just written, don’t get the idea that I don’t like Flip Mats, on the contrary, I think they are a great gaming tool, and the $12.99 price is great for the quality of art and the durability of the material. I hope to use some of the other Flip Mats I own soon. At least the Arena one I know will be used next session. Like I said your mileage may vary!

So, you want to play a pulp genre game? Part 2