Some time ago I purchased the OVA RPG on Lulu. Much like the better known “Big Eyes, Small Mouth” it’s a multi-genre roleplaying game meant to bring the tropes of Japanese anime to the gaming table. I would not call myself an avid anime fan, but I’ve seen a few movies and TV series that I really enjoyed. And so it’s no surprise I eventually picked up a anime RPG.

Some years back I picked up a copy of the aforementioned BESM but I found it a bit too crunchy for my tastes. As I’ve mentioned several times before, I prefer rules-lite games. And although BESM is extremely versatile and can be used to run games in any conceivable genre, it was not was I looking for.

More recently I heard about OVA and decided to give it a chance. And I haven’t regret this decision. The digest-sized softcover book contains a very versatile but still easy rules system. Even if you are not into anime per se, OVA could be an interesting alternative to other multi-genre games. When you buy the book directly from Lulu it sets you back $29.95. This is a bit expensive for my tastes, but on the pro side, OVA has a lot of anime charm, great artwork and it’s full-color. 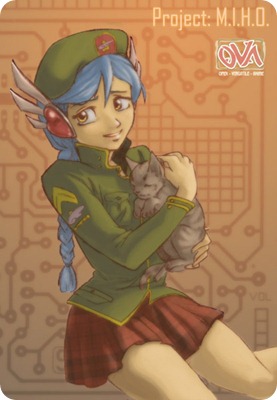 What makes OVA different from most classic systems is that not every character is described by the same set of attributes. When creating a character you pick and choose the attributes a character is good at. If he’s strong, you write down the Strong attribute. If he’s wearing armor, you note down the Armor attribute. Each attribute is also ranked from +1 to +5. When you use the freeform character creation method you can pick Attributes and levels as you see fit. After choosing the Attributes it’s also recommended that you pick a few Weaknesses as well. Everyone knows that a character with no flaws gets boring fast. Weaknesses are rated from –1 to –3.

Aside from the freeform method where you just create your character as you see fit, there are  also several ways to limit a character’s power. One way to do this is called “Ground Zero” in which you sum up the levels of all your Strength and Weaknesses. The sum shouldn’t be higher than 5 or lower than –5 if the character is still to be considered within the limits of the campaign. Each character also has a Health and an Endurance value with describes the characters ability to sustain damage, fitness and vitality.

The majority of the book is taken up by sample characters and an extensive list of attributes and weaknesses for the players to pick from. Please note that even weapons the character is carrying or armor he’s wearing is considered attributes. And so are the spells of a magician. Most attributes and weaknesses listed in the book are described by a few paragraphs of text and give the player an overview what the different levels do.

The game provides several sample characters that not only can be used to start playing immediately but they also are great examples of the versatility of the system. I can easily imagine running anything from Full Metal Alchemist over Slayers to Love Hina with it. 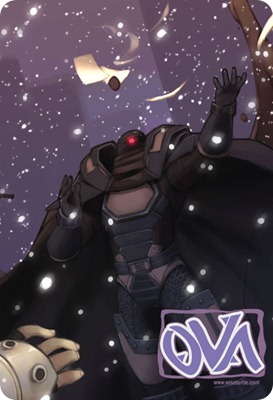 The dice mechanic used in OVA is pretty easy as well. Usually you roll 2d6, take the highest number. If you have appropriate Attributes or Weaknesses, you add as many dice as you have levels. If doubles, triples etc. are rolled these are added together. The highest single (or double, triple etc.) result is then taken. Is the result higher than a difficulty number decided by the GM, the action was successful. Ones are never added together and if you have more appropriate Weaknesses than Attributes “negative” dice may be rolled. In this case doubles are ignored. So, if you roll 3 negative dice, a result of 5,5,2 equals 2.

In combat each player can make one attack per turn and an unlimited amount of defensive actions. Multiple attack actions are possible, too, but the attack rolls are then modified by the number of all actions taken. If you want to attack three times you have to reduce your number of dice by 3. There’s no Range in OVA. Either you can reach your opponent in one round or you can’t. It depends on the GM’s discretion and the situation if a target it in range or not. This is definitely not everyone’s cup of tea, but I have to admit, I like it.

The author of OVA has also added classical anime tropes like gag damage and the angry female strike, which is impossible to dodge (even if you saw it coming) but which is always gag damage. Gag damage is of course very painful but it wears off after a very short time.

The book also contains rules for character advancement, a short GM chapter and several sample NPCs that be used either as additional inspiration for player characters or as enemies or allies of the player characters. There book contains no setting, so any aspiring OVA GM will either have to use a homebrew setting or the world of his favorite anime. But given the nature of the rules it should be pretty easy to adapt almost any setting to OVA easily.

I have to admit I like the Open Versatile Anime RPG very much. It has pretty easy to learn rules, supports narrative gameplay and is fun to read. And even if you are not an anime fan, you can still use OVA to run games, if you don’t mind the anime style artwork and ignore some of the anime tropes in the Attributes and combat sections. To learn more about OVA, check out the official website!