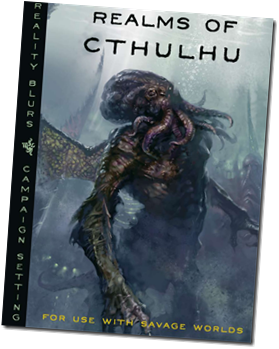 Realms of Cthulhu is a campaign setting for Savage Worlds published by Reality Blurs. The 160-paged book contains everything needed to run a Cthulhuesque campaign but the Savage World rules. A copy of the Savage Worlds Explorer Edition is needed. This review is based on the PDF version of the book, which has been thankfully provided by the publisher. Thanks again!

Although it might seem a bit strange, but Savage Worlds is actually quite a good fit for a Cthulhu campaign. Some of Lovecraft’s Mythos stories and definitely a few written by other authors can be considered part of the pulp genre. And if there’s one system suited for pulp, it’s Savage Worlds. But the majority of Lovecraft’s Mythos stories have a more depressing mood where the protagonists’ futile attempts to fight alien gods and bizarre creatures only end in failure and madness. Is Savage Worlds really suited for such a campaign style? I kept that question in the back of my head while reading Realms of Cthulhu and I was surprised that this might actually work.

But let’s have a look at the contents of the book first. Realms of Cthulhu is divided into ten sections: Introduction, Equipment, Setting Rules, The Keeper’s Section, The Cthulhu Mythos, Matters of Magic, Mythos Tales, Mysteries of Drake Manor, Citizens and Denizens, and Converting Cthulhu.

Character creation in Realms of Cthulhu is pretty close to vanilla Savage Worlds with two exceptions: Corruption and Sanity. Sanity is your character’s mental toughness and starts at 2 plus half your Spirit minus Corruption. Corruption starts with 0 and is increased every time your knowledge about the Mythos increases. Realms of Cthulhu adds two new skills to the game: Knowledge (Mythos) and Knowledge (Psychology). All the standard skills from the Savage Worlds rules are also eligible for investigators. There are also a few new Edges and Hindrances to choose from like Unusual Lineage/Looks (Innsmouth look anyone?) or Psychotherapist.

The section on equipment lists a few new weapons and vehicles for the three suggested eras of play: the 1890s, 1920s and today. There are some guidelines on how to calculate prizes for the different eras. Although this section of the book is pretty short, it’s more than enough for most campaigns. Realms of Cthulhu is about investigating and perhaps even fighting the unknown and not about acquiring loot.

The setting rules are what sets the mood for the game. Some aspects of the Savage Worlds game like Arcane Bachgrounds, Gadgetter and Weird Edges are disallowed because they don’t fit into the world.

Realms of Cthulhu has four campaign styles called Heroic Horror (Pulpy/Pulpy), Slippery Slope (Pulpy/Gritty), Dangerous Action (Gritty/Pulpy) and Dark Spiral (Gritty/Gritty). The first word in the parenthesis describes the lethality of the campaign, the second one the insanity.
Pulpy damage works pretty much like the one in the Savage Worlds core rules but the gritty variant is much more lethal.

The Sanity system used by Realms of Cthulhu is modeled after the existing system of physical damage. But instead of physical injuries, investigators may get mental disorders or even become permanently insane if the mental shock was too great. In my opinion using the existing damage mechanics for mental damage, too, was a stroke of genius. That adds a level of depth to the game without adding any complexity. When you know how normal damage works, you understand the sanity rules. Of course no Cthulhu game would be complete with a list of mental illnesses and ways to treat insanity. And of course Realms contains both.

The Keeper’s Section contains everything the gamemaster needs to run a successful Cthulhu campaign. It sets the theme for the different eras and even four campaign ideas are given, complete with a reason for the players to work together, a synopsis and a detailed background. The most interesting campaign is probably The Frequency of Madness, in which the characters are asylum escapees that have battled the Mythos before. The books also gives a lot of tips on how to run adventures in Realms of Cthulhu, how to add elements of horror, how to properly use monsters and how to put red herrings to good use. While most veteran gamemasters will not learn anything new here, there’s a lot of good advice for any novice keeper.

The section on Matters of Magic lists various books of the Mythos included the dreaded Necronomicon, von Juntz’ Unaussprechliche Kulte and the Book of Eibon. These books may be used by the characters to get an deeper insight into the Mythos and eventually learn spells. The list of canon books is quite extensive and there are even a few tables that allow the creation of random books for your campaign.

Casting spells requires knowledge of the spell and a successful Knowledge (Mythos) roll. Each spell has a casting modifier which can be reduced by taking more time to prepare and cast the spell. The list of spell is again pretty exhaustive. The section concludes with some guidelines on how gamemasters can tweak existing creatures and NPCs by adding dark gifts, and some tips on how to add powers from the core Savage Worlds book to a Realms game.

The section on Mythos Tales starts off with a handy Mythos Tale Generator, These tables are meant to help the GM with coming up with a rough outline for an adventure and is similar in form and function to the Savage Tale generators in other Savage World campaign settings. A gamemaster who isn’t afraid to improvise can run games almost prep-free using this tool.  The creature generator is another set of tables allowing the GM to create new creatures for his game, either totally random or hand-picked.

If you don’t want to prepare your own adventures, Realms of Cthulhu provides you with four two-paged Mythos Tales called “Fragments of Mu”, “Paradise Lost”, False Idols” and “Bayhaven Lights”. The section then concludes with Reality Blur’s addition to the Mythos: Drake Manor. Drake Manor is meant as a starting point for any Realms campaign. The gamemaster can either use Drake Manor as a backdrop to his own campaign or he may use the fully-fleshed out Mythos Tale as an introductory adventure. Mysteries of Drake Manor contains everything you need for running that adventure including fully stated-out NPCs and many tips for the novice GM.

The section Citizens and Denizens lists all the supporting cast the gamemaster could ever need from a humble antiquarian to the great Cthulhu himself. There are Savage Worlds stats for all NPCs and creatures listed but the titans and gods. But beings like Cthulhu, Hastur or Azathoth should be used as plot devices not actual opponents in combat. This section also gives some advice on how to use these powerful beings in play.

Let’s return to my initial question: Is Savage Worlds really suited for such a campaign style? Yes, it is. Reality Blur’s Sean Preston delivered a great campaign setting that combines the fast, furious, fun rules of Savage Worlds with Lovecraft’s Cthulhu Mythos. The Sanity mechanic used in Realms makes perfect use of the existing damage mechanics and is not just a rehash of the Call of Cthulhu Sanity mechanic. If you are a fan of Savage Worlds and H.P. Lovecraft’s Cthulhu Mythos, you will definitely not be disappointed by Realms of Cthulhu!

One last note: The Realms of Cthulhu investigator dossier designed by Cheyenne Wright is actually one of best looking character sheets for any Cthulhu game I’ve seen so far! You can download the sheet here.