Like my previous post this one is also a review of a PDF product we received a review copy of, this time around the Genius Guide to Mystic Godlings by Super Genius Games.

This is the sequel to a previous electronic book, the Genius Guide to Godlings, which I do not own, but this book told me I did not need the first one to enjoy it. And I really wanted to, but at the end of the day I did not. It broke a lot of the rules of the Pathfinder RPG to make the character godlike, but they just seemed like a power gamer’s dream! That is not to say the book did not give me some ideas, but I won’t be unleashing the Mystic Godlings on my regular campaign anytime soon! 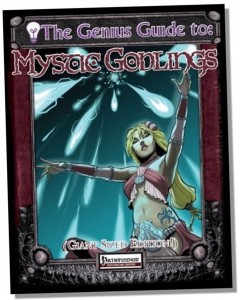 I REALLY wanted to like this PDF supplement for the Pathfinder RPG. Pathfinder is my current system of choice for fantasy gaming. I own three previous supplements by Super Genius Games, the Genius Guides to Feats of Battle, Feats of Subterfuge and Feats of Spellcasting. Despite minor nitpicks, all great products, so when I was given the chance to review the Mystic Guide to Godlings I couldn’t wait!

I had not read the previous Guide to Godlings and despite the assurance in the text that I did not need too, it felt like I was reading just half of a full product. I like that Super Genius Games PDFs are obviously meant to be read on the computer, their length (relatively short, just 18 pages in this case) and their layout reinforces this, but something seemed to be off on this one. Information on the cover was repeated on the next page and presenting two new classes in one combined write up proved more confusing that helpful, even if they shared so many elements. Descriptions of class features and other details seemed haphazardly organized and even the section headings threw me off for a loop. 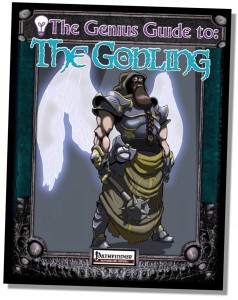 But all my previous complaints are minor quibbles that an astute reader can work through. My major complain with the classes is how overpowered they feel. From selecting which attribute is used to determine effects related to their spells, to ignoring arcane spell failure on the armors they are proficient with, to not needing to make concentration checks. This last part was particularly problematic. I know some of my players hate that concentration for spellcasting has become so much more difficult in Pathfinder, but I see it as one of the attempts at equalizing the spellcasting classes (whether it’s the best way or not that may be open to debate, but for argument’s sake let’s stick to the RAW) with other classes and this just makes the Mystic Godlings too good!

I don’t see myself allowing Mystic Godlings as classes in my campaign. That is not to say there is no place for such classes in certain campaigns, while reading the book I kept thinking, “I wouldn’t use this right now but…” And I had lots of ideas!

I could see using this supplement, perhaps with its accompanying volume, to play an all godling campaign. Here are a couple of ideas:

Mystic Godlings may also be effective villains for a campaign; I may even find a use for the class as a high level opponent later in my campaign…

The book is not immediately useful to me; the classes presented in it are not suitable for a regular Pathfinder RPG campaign as they are. As with everything subjective, your mileage may vary! Let me know what you think of godlings or your experiences with them.