Let it never be said that I am a fickle fan! The superhero fever steamroller plows on unabated…

This was my first attempt and creating a villain for ICONS. I didn’t want to create an overly powerful villain, but tough enough to present a challenge to Mind Shadow and her (possible) allies. Here is the write up for the Mindstrom: 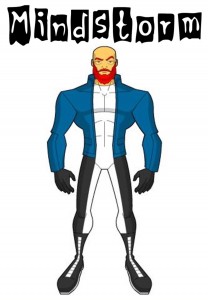 Professor Aldo Walden was a renowned biophysicist working for a secret government project attempting to enhance the mental capabilities of soldiers. When a government investigation revealed mismanagement of funds and illegal trials on humans Professor Walden panicked and used the procedures he had developed on himself. When the men sent to arrest him arrived at the lab they found him comatose. Taken to a military hospital and placed under surveillance Aldo Walden remained in a coma for over a year.

Unbeknownst to his captors his mind had splintered into a thousand personalities now fighting for control of the powerful mind created by the experiment. One personality slowly emerged as the dominant one, a sadistic brutal aspect of Walden’s personality, by the name of Mindstorm. When Mindstorm awoke he used his powers to enact revenge upon his captors and escape.

Using a variation of the suit developed as part of the original project, he embarked on a crime wave that made little sense to the authorities. All his crimes had the ultimate goal of allowing him to perform more experiments to enhance his mental powers and make him unstoppable.

While Mindstorm is in control of the splintered mind of Professor Walden, other personalities occasionally come to the fore and attempt to stop him. Containing the different aspects fighting inside his mind causes delusions, often Mindstorm looses touch with reality and fails to recognize when a plan has failed, fighting until captured.

During one of his incarcerations Mindstorm was responsible for giving his nemesis Mind Shadow her powers when he took over the hospital for the criminally insane and used the place to experiment with power enhancing drugs. Since all others who were given the drug died and she survived, Mindstorm has become obsessed with defeating the heroine and dissecting her to learn more about the effect his drugs had on her.

Well there he is! Creating a villain for ICONS is more of an art than an exact science. I’ve read the book but have not actually played yet. I think that is my biggest concern. I’m putting together a campaign to run when I take a break from my regular weekly Pathfinder RPG campaign, but I’ll play a test run of the system soon to get a better feel for it. I’d love feedback from those of you out there who have actually played the game.

You can grab a PDF copy of Mindstorm here and one for Mind Shadow here.

Your thoughts and opinions are welcome.