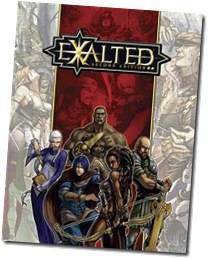 White Wolf’s Exalted is one of the games that immediately piqued my interest when it came out. I’ve enjoyed several White Wolf games before and I was excited to see White Wolf’s version of high fantasy.

While I still leaf through the rulebook once in a while, I never have played or run that game. That has several reasons. I like a lot of the concepts of the world of the Exalted but for some reason I have some trouble “getting” the world completely. How exactly do the territories in the Treshhold look like? Is this supposed to be the GM’s sandbox or will everything I come up with be contradicted in later books?

The other thing that bothered me are the rules. As you probably know I prefer rules-light systems. And while the core rules are pretty easy, the charm mechanics, combos etc. can become pretty crunchy.

So, what’s your take on Exalted? Should I give it another look and can you give me any tips on how to get into the games’ setting easier? Any advice is highly appreciated.

Interview with Andrew Modro aka Corvus