A while back Zoltan Lečei from The Games Collective, a Croatian game developer,  contacted me and told me about their game Awaken which had been successfully funded by Kickstarter in 2015. Awaken is a Dark Fantasy Roleplaying Game with awesome artwork and an intriguing setting. Over the last few days I have been leafing through the book multiple times and I have to admit, I like what I am seeing.

The 217-paged book (Disclaimer: Zoltan provided me with a free PDF copy) is a sight to behold. What immediately becomes obvious that a lot of time and effort were put into the look of the game. As I mentioned before the quality of the exterior and interior art is awesome. Same goes for the layout. I’ve included a couple of art pieces from the book as examples throughout this post. 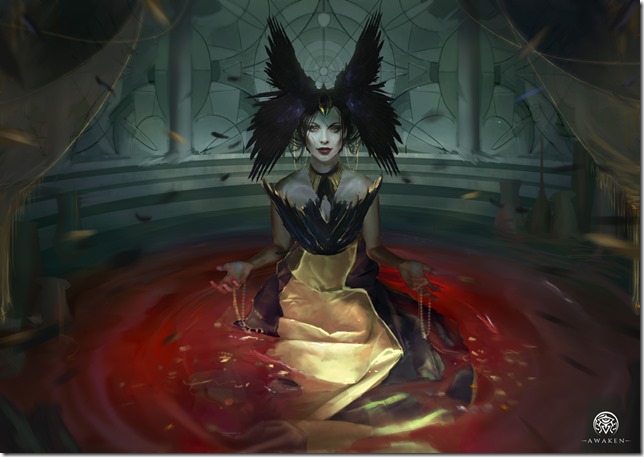 The game itself focuses on the Vasalli, people who spontaneously developed powerful abilities which go along with minor cosmetical changes. The supernatural powers of the Vasalli are said to be a gift from God, but their usage comes at a price. Vasalli unable to control their powers get corrupted in mind and body.

The setting is the Alliance of the Great Cities, eleven nation-states situated on a large peninsula, which barely survived a war against the underground-dwelling Vargans. These very-same Vargans have now returned and are a threat to the Alliance once more.

From what I’ve seen so far Awaken takes inspiration from many sources. The Vasalli are somewhat reminiscent of the Exalted. The Vagrans remind me of Dragon Age’s Darkspawn. The rules and some of the concepts are cleary inspired by White Wolf’s Storyteller games, but instead of using ten-sided dice, Awaken uses pools of d6. There are also huge colossi created by terrible rituals which transform multiple Vassali into one huge creature giving up their lives and individuality in the process – body horror at its finest.

Even though some inspirations seem obvious, from what I’ve seen so far, Awaken manages to mold everything into a coherent setting combined with a set of simple rules. Unfortunately I haven’t had the time to read the game thoroughly or even play it, but I looks intriguing enough to warrant a closer look.

If you are into dark fantasy settings there are currently many games to choose from. Aside from Awaken, there’s Dragon Age, Shadow of Esteren, Symbaroum and many, many more. What speaks most in favor of Awaken is the awesome artwork, an interesting setting which is its own thing despite being inspired by many sources and the rules-light mechanics. Of course there are also a couple of problems. The book definitely needs some more editing. I noticed several small typos, and sometimes it becomes obvious that the texts were not written by native speakers. But my first impression of the book is definitely positive.

Again I have to stress this is not a proper review, since I haven’t had the chance to really get into the finer details of both Awaken’s setting or rules. I can only recommend that you check out Awaken for yourself. You can get the game in print or digital form from the official website or from RPGNow for $19.99 (PDF) or $49.99 (Hardcover) respectively. There’s a also a Print+PDF deal for $49.99.
If you want to check out what Awaken has to offer, there’s also a free (or rather PWYW which includes free) quickstart PDF.