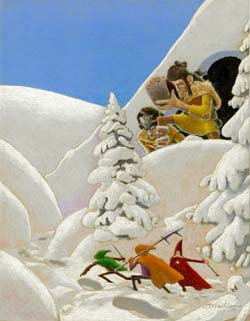 This weeks Free Stuff is: Swords & Wizardry
Want to see what all this Role Playing Game stuff is all about and don’t want to spend a dime to do it? Then your in luck pal because there is a pretty good game based on some of the origin Dungeons & Dragons called Swords & Wizardry. Download it free! Play it for free! Then thank the makers over at Mythmere Games for providing you with a free game and entertainment!

On the Mythmere games website they wrote this stuff up: The Swords & Wizardry project builds and supports free-form roleplaying games. That is to say, games where “light” rules create a framework instead of trying to cover every detail, every rule, and every situation. The Swords & Wizardry game “clones” the original rules of the fantasy roleplaying game that started it all back in 1974, when it was published by Gary Gygax and Dave Arneson. We also support two games we didn’t write: OSRIC and Goblinoid Games’ Labyrinth Lord. OSRIC is a clone of the game’s 1978 “First Edition,” and Labyrinth Lord is a clone of the game’s 1981 “Basic” Edition. All these game rules are rewritten and reorganized to be easier to learn and play.

So please check out the site and start downloading your copy of Swords & Wizardry.

Oldies but goodies! Some great digital game supplements for the New Year…