Last Saturday I ran my weekly Dungeons & Dragons adventure. This weeks adventure was one I called “The Royal Sword of the Elvish Plains People” which addressed the back story of one the player characters in particular. 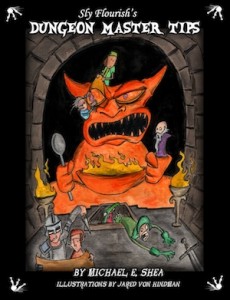 In planning this adventure I did things a little differently then I normally do. I picked up a copy of Sly Flourish’s Dungeon Master Tips book and used the game planning techniques inside to plan out this adventure. As a result the game went flawlessly. Not since my very first game of Dungeons & Dragons have I felt so prepared at the game table.

I have nothing but good things to say about Sly Flourish’s book. it’s filled with straight forward advice and checklists for creating a great Dungeons & Dragons adventure. Dungeon Master Tips book along with Robin’s Law should be required reading for anyone who takes on the roll of Dungeon Master.

My players first had to transverse the Forest of Illusion, navigate their way through a Black Crystal Cave with a  scary, sleeping, silver dragon and finally make their way through a labyrinth to dispatch some Minotaur. In the end my party was successful in obtaining the Royal Sword of the Elvish Plains People. 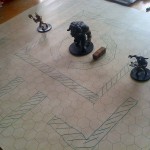 In this adventure I was able to use my battlemats for the Forest of Illusion and Minotaur battles. I didn’t have as much time as I would have liked to have when it came to draw things out on the battlemats. I think it shows. In the future I am going to try my best to avoid being rushed when drawing out encounters. (Famous last words, right?) 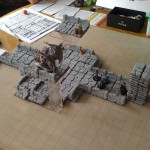 The Black Crystal cave on the other hand turned out pretty well. I used several of my Hirsh Arts Castlemolds as well as my Combat Tiers. Though I was happy with how the encounter looked visually, it did not play out at all how I had envisioned in my head. Which was good in the long wrong. My players where think outside the box and I was able to go with the flow of something completely unexpected happening. 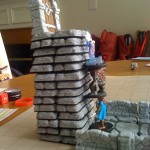 My players managed to sneak through the cave without waking the silver dragon or other hidden monsters I had lying around. They got through that particular encounter without a scratch. In doing so they also passed up two treasure chests and several barrels and boxes.

After the game was over my fiancée cooked up some freshly caught salmon a family friend bought for us the day before. We all sat around and ate dinner chatting about the game and other things going on in each others lives. Good times.

My Gamer ADD is again in Full Swing