Last March I wrote a post titled The Importance of Dice where I talked about how important dice are to both players and game masters alike. It seems like everywhere I look every person has their own unique way of holding and rolling their dice. Some people wont let anyone else touch their dice for fear of negative consequences as a result. The options of dice we have to choose from as participants in this role-playing game hobby of ours have is staggering, but today I am just going to focused on one brand of dice. Gamescience dice, and what my personal experience has been with them.

Shortly after I wrote The Importance of Dice I placed an order with Comic Lair for a set of green opaque Gamescience dice with white numbering. I chose to go through the Comic Lair because they where one of the first places I searched for that would ship to Juneau, Alaska. Finding companies that will ship to Alaska can be a challenge. I also chose to go through the Comic Lair because I called them and got to speak with the owner Chad, who took his time to help me out and answer all of my questions. Who says customer service is dead?

Chad explained to me that Gamescience don’t look perfect. They don’t ship from the manufacture with painted numbers for starters. All number painting is done third-party either I as a buyer could paint them in myself and save a couple of bucks, or Chad could do it for me if I choose. Gamescience recommends using deco paint pens with an ultra fine tip which is what Chad used. Recently he has been testing out Sharpies new enamel paint pens and him they seem to be adhering better to the dice and he has been experimenting with different color choices on his eBay store. It will take some time to know if they last any longer then the deco paint pens that Gamescience recommends. I also asked Chad about the blemishes, or imperfections on Gamescience dice that I had been reading about. He explained that yes, these dice do have imperfections on them as result of how they are molded. This is something easily fixed with an emery board. He also cautioned me that no matter what, these dice will not ever look 100% flawless like other dice. Unlike other dice, Gamescience dice do not go through a tumbling process to smooth out these imperfections, but that is why some RPG hobbiest prefer them. As a result you have a set of dice with sharp edges that cause the dice to come to a stop more quickly. This produces a more random dice roll then most other bands of dice with their smoothed down rounded edges. What this means is a dice with rounded edges will roll across your table longer allowing it to find its center of gravity. The result is that a dice with rounded edges are more likely to roll a particular number depended on where it’s center of gravity is. A Gamescience dice, with its sharp edges will not roll as far and as a result will not find its center of gravity making each roll more authentically random then other bands of dice with rounded edges.

I thanked Chad for all his time and asked him to send me a set of Green opaque dice with white numbers. I wanted to leave the number coloring up to someone who had more experience than myself. Less than a week later I got my first set of Gamescience dice in the mail.

The dice came well packaged and survived the trip from Trenton, New Jersey all the way to Juneau, Alaska. When I took them out of their package the first thing you really notice is how sharp the sides of each dice are. It really sands out. I spent a good ten minutes just squeezing them in my hand and feeling all the edges. 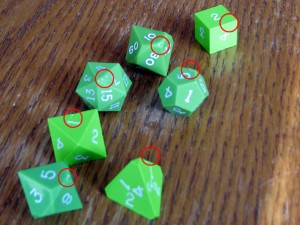 The next thing I noticed was the blemishes on each dice. They did stick out and they did not allow the dice to lay flat on the side that had the blemish, but just as Chad had said, a quick file with my fiancée emery board leveled off the imperfection so the dice would lay flat on the affected side. Also like Chad said the dice do not look flawless. Leveling off the imperfection made it so the dice would lay flat but you can still see where it was. Some of the dice also look a bit lighter or darker from one another. It’s just how it is.

Ever since I got my set of green Gamescience dice I have been using them at every game I have played since. I have noticed that the white numbering is starting to slowly flaking off. I think when and if it gets to a point where I want to redo the numbers on my dice I will try the crayon method.

I do not miss using my other dice at all. I feel that as a game master it is my job to provide a far balanced game. Having a set of dice that I feel are producing a more random result is part of that job. It’s also important to remember that when you are playing an RPG having fun is key. I am not requesting my players to go out and buy Gamescience dice. (but some have, including my Fiancée, who has bought several sets now.) I want my players to have fun and that means everyone gets to use the dice they like the most. Mine just happen to be Gamescience dice.

Check out Bridget’s post at Dicemonkey.net to see what she thinks of Gamescience dice.