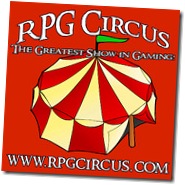 For quite some time the crew of RPG Circus and me tried to figure out how to get me on their show. Alas because of the different time zones this has been more problematic than we anticipated. But when I decided to attend Gen Con this year, we planned to record something in Indianapolis.

So on one of the “Four Best Days In Gaming”, Mark, Jeff and I (Zach was running a game at this time) sat down at the Champions restaurant in the Marriott hotel, had some great food and talked a bit about Gen Con.

This little talk made it into the latest episode of RPG Circus, which is finally available! I also want to use the opportunity to thank Jeff, Mark and Zachary for having me on the show. They are the nicest people and I can’t wait to meet them at Gen Con 2011 again!

I have a plan!