I guess we’ve all had them. The system you love; the one you can’t wait for the next supplement to come out for. And then all of a sudden, BOOM, cancelled!

Thankfully in the age we live in most systems with a modicum of popularity live on in the internet. Some even thrive. Still it’s not easy seeing the one you love go away. If you’ve been playing long enough, before al Gore so generously gave us the Internet, you experienced it, a game line was cancelled and you had no more support, no new book coming out. It was like getting dressed for the prom and being stood up, if the prom was a game and corsages were dice!

What can I say about Star Frontiers that I have not said before? I remember when I first bought it. I saw it at the book store, I had already been playing D&D for a while and here was a game by the same company, TSR, for science fiction role playing, I had to have it. So I begged my mom for the $12 (I think that was the price but my memory is not what it used to) and purchased it. I examined the box, punched out the counters and soon was playing with my friends.

This was my first sci-fi game and I had so much fun with it. I played it through high school and into college. During those first months I got my hands in every supplement I could, which granted were not many, none of the local stores seem to have them. I had to mail order Zebulon’s Guide to the Frontier.

What I didn’t know was that by the time I discovered Star Frontiers the game was already dead! Zebulon’s Guide to Frontier Space (its proper name) was published in 1985. I discovered Star Frontiers in 1989, a good four years after. When I learned they were not producing any more supplements for the game I was heart broken. Mind you this did not stop me. I played the game for years; I believe the last session was played in 1993 or 1994. So it goes to show you, a game may be “dead” for a publisher but it lives on with the fans.

Despite my best efforts I’ve never completed my Star Frontiers collection. It along with the nearly, but not quiet, complete run of the Rom comic book, are among those nagging  things I have to get around to completing one day. 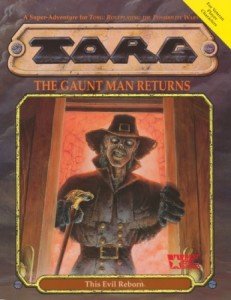 Despite proclaiming my love for the setting but my dislike for the game on a previous post, I was saddened to see the TORG rpg cancelled. Back then I worked on a comic book store that carried a wide selection of games (and if you are curious the shop is still around and it’s where I got the Orcus mini) where I got most of the supplements for the game. Those I could not buy I read at the store on lazy afternoons. That’s how I kept informed of the Possibility Wars.

I may not have liked every twist and turn the storyline took, but it was fun and exciting, and it felt like being part of something greater. That kind of collaboration and involvement is easy to imagine in our digital age, but back them, well it seems amazing.

When TORG ended I felt like part of my gaming childhood, or adolescence at least, died. By then I was older, wiser, and expected different things from my games. Perhaps  even took my games too seriously, but I have never given up hope of seeing a TORG revival. I guess you can’t keep a good game down! 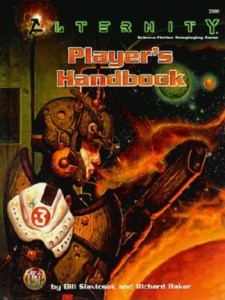 By this time the Internet was an integral part of my life and it was there where I learned of Alternity. TSR’s upcoming sci-fi game, a toolbox of rules and ideas that promised to do for sci-fi what AD&D 2nd edition did for fantasy! (Say what you may about the system, I was a big AD&D 2nd Ed fan, and played it for years.)

When it finally came out I snatched it up and soon after adapted a home brewed campaign I had been working on to the system. It was modular, fun, had a unique dice mechanic and is still today one of my favorite science fiction games I have ever played. It scaled easily to various genres of sci-fi and it allowed me to create the setting I wanted. Needless to say I was an immediate fan.

By this time I was not big on pre-published adventures (I’m still not a fan) so I skipped most of those. But I got most rule supplements. Many Alternity Fans are also fans of the Star Drive Campaign setting, but I was never enamored by it. Like many Alternity books it suffered from having really awful interior art. One campaign that had an amazing look and design was the Dark Matter book, the Alternity system take on modern role playing and the X-Files craze.

Both settings lived on long after the system was gone, but when Alternity was cancelled I lost what I liked most about the game line, the generic sci-fi rpg I could adapt for my compulsive home brewing. Thankfully Alternity lives on via a very active community alternityrpg.net. Every now and then I take the book down from the shelf, reread it and toy with the idea of starting a new Alternity campaign. I just might one of these days, I’ll let you know. 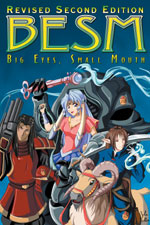 I never played Big Eye, Small Mouth (or BESM) 1st edition, I heard great things about it. I have not been a fan of anime for many years but I did hear the game was easily adaptable for a super’s game. When the 2nd edition came out I purchased it for specifically this purpose, to retool it as a superhero game. Guardians of Order actually did it for me and published Silver Age Sentinels. This was the last system I used for a supers campaign and despite its problems I loved it.

When they published the Tri-Stat dX system I used it for a sci-fi game, adapting the very same campaign I had played using Alternity some years before. When Guardians of Order went out of business I was sad to see the company go, but had hopes for the system when I learned White Wolf would publish the 3rd edition under their ArtHaus imprint.

But then 3rd edition came out and for me it lost some of the magic. The book was massive, and seemed so much more complex. It was so far off from the original BESM, it was not the game for me. So I realized the 2nd edition I loved so much and the games that came from it were gone, and gaming was all the worse for it. At least dX is still out there so in a way the system I lived on. 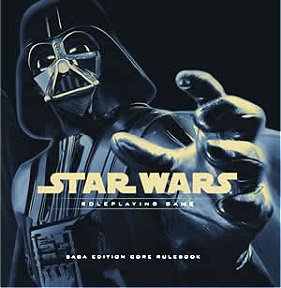 As a child of the 70’s I grew up with Star Wars. I saw the original movie in theaters, endured the prequels and currently enjoy the Clone Wars TV series. So the attraction to a Star Wars RPG is obvious. I had the different editions of the D6 West End Games version, but never managed to get a campaign off the ground. Likewise the first two tries at a Star Wars rpg by Wizards of the Coast failed to capture the magic of Star Wars in the D20 format for me.

This all changed with the Saga System. For me it took the best of the D20 system and hammered it into a proper Star Wars game. I loved it from the time I read it; I played a short campaign using it and own most of the books. Those I have not purchased yet I’ll be getting soon.  I think the Saga System is easily adaptable to be a generic sci-fi game, and toyed with the idea of adapting it for a Rifts game. Fan made conversions for fantasy and Cthulhu games show the versatility of the game engine.

Wizards’ decision to cancel the line was a sad moment for me. By then I had stopped playing D&D 4th edition so the only products I was buying from them were the Star Wars books. When the line ended my last ties to Wizards of the Coast were severed.

I’ve said it before, you can’t keep a good system down, and one of the developers of the Saga System is working on a system neutral adaptation of the rule system e20 System Evolved.  I find it very interesting, although some of the D&D 4th edition elements in the preview worry me; I’m willing to give it a chance. I’m sure other Star Wars role playing games will come out in the future, the license is just too attractive. We’ll see what happens, but will it be as great as the Saga System?

Looking at this short list of games I realize three of the five games were sci-fi games, and another I used for a sci-fi game. I guess I’m still looking for the right game of this genre. So what systems have you enjoyed and were sad to see go the way of the dodo? I’d love to know…

The Mirror Tells Her Lies