Some time ago, Abraham Neddermann aka the Dice Creator showed a method on his blog on how to create custom dice easily. You just need glossy photo paper, a laser printer and a flat iron. In order to test out the printed dice he had a raffle on his blog. Three lucky winners were chosen that got some custom-made printed dice which they were asked to review. I was one of the winners, and here’s finally my review. 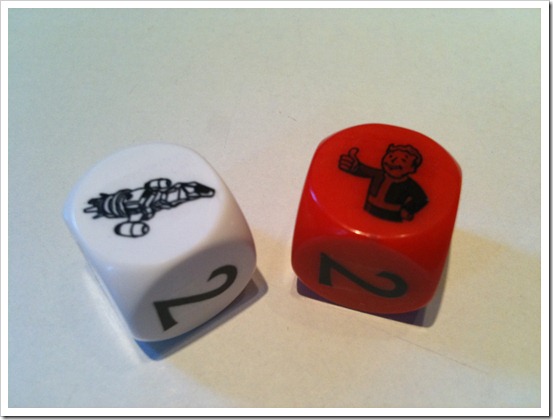 These are the two dice Abraham made for me. The white one sports the space ship Firefly on one side and the number 1 to 5 on the other sides. The red Fallout die has the numbers 2 to 5 and the image of the Fallout mascot and an old Fallout shelter symbol on the remaining side.

In order to test the durability of the dice I put them into the dice bag with all my other dice and carried them around a lot. They even made the trip to Gen Con and back with me. Alas I didn’t play that many games recently that used d6s, so I further maltreated the dice by rubbing them together. I even tried to scratch off one of the numbers using a fingernail. But the dice are surprisingly unimpressed.

Even given a fair amount of maltreatment the printed images don’t get off that easily. I am pretty sure that they can take quite a beating before the images fade or get destroyed. I doubt that normal wear and tear would do much harm to the dice.

The only thing I didn’t like that the part of the dice with the images on it are more glossy than the rest of it. I think it would look better if the whole die would be coated with some transparent finish. This would not only look better, but it would also make the surface more scratch-resistant.

I haven’t tried to make my own custom dice using this method yet, but I guess it should be a nice project for the winter months.