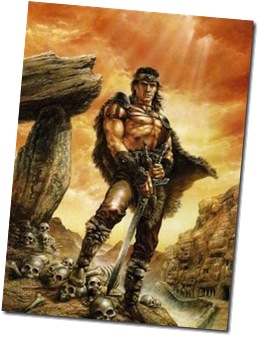 In the latest episode of RPG Circus Jeff, Mark and Zach talked about low, mid and high level play in games like D&D. For some reason a lot of people find the early to mid levels much more enjoyable than high-level play.

While earlier editions of D&D included an “endgame” where adventurers settle down, build castles, towers or religious centers, starting with D&D 3.0 adventurers were meant to keep fighting monsters up to the epic levels beyond 20. High-level characters in D&D (especially since D&D 3.0) have a plethora of options to choose in combat, countless magic items, but on the other hand monsters have more and more immunities and special rules to counter that. This sometimes slows down combats to a crawl and a lot of groups move their focus away from adventuring to politics and intrigue instead.

In my personal experience most people prefer low and mid-level gaming. And especially in recent years grim and gritty sword and sorcery settings got more popular again, which usually are low-magic and not as overpowered as some of the high-magic settings like Eberron or Forgotten Realms.

After listening to the aforementioned RPG Circus episode I remember that I have read about an interesting D&D variant which limits character advancement to around level 6 or 8. Characters advance normally up to that point. When reaching the limit they can still acquire more feats and skills but don’t get any more levels. While the characters get more options and are more versatile, they don’t raise in raw combat power. Combined with a grim and gritty setting this could be an interesting option for any D&D game. In a way, this rule variant helps characters to stay in what some players consider the “sweet spot” of D&D 3.0/3.5.

After some research on the internet I found Epic 6 or E6 at the Mythweavers Wiki. The wiki page gives you a short description on how to use this variant and why it was designed that way. I think I also have seen a PDF document of this variant or something similar floating around on the ‘net, but I wasn’t able to find it. When I am not mistaken it was a complete OGL game which contained everything you needed to play E6.

Has one of my readers ever played or run an E6 game? Does it really work as advertised? Please post your comments below!