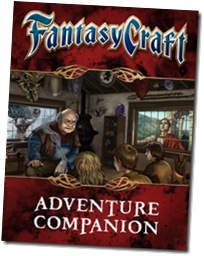 When you have read my blog for quite a while you probably noticed that I have a soft spot for Crafty Games‘ Fantasy Craft. But Fantasy Craft is a more complex game than the other games I usually recommend. I have to admit that Fantasy Craft’s rules complexity is sometimes just a bit outside of my usual comfort zone.

But that said I am also convinced that it’s the best game that evolved from the d20 system. The Fantasy Craft core rules open a lot of options for interesting campaigns that don’t follow the classic high fantasy model. And a lot of the concepts in Fantasy Craft is meant to make the GMs job much easier than in D&D for example.

With their latest supplement, the Adventure Companion, the good folks at Fantasy Craft show how versatile their rules system can be used. The 145-paged book which has been released a couple of days ago in PDF format, contains not just one but three unique fantasy campaigns, and a plethora of new options for your Fantasy Craft game, like new expert and master classes.

If you ever wanted to play in a game freely based on ancient Rome, Cloak & Dagger will be for you. It’s also very refreshing that the book’s author, Alex Flagg, opted to make C&D a human-centric setting. I sometimes get pretty tired of standard fantasy with elves and dwarves, and the lack of non-human player races makes it easier for GMs to use the material in the book for a historical campaign set into classical Rome.

The second included setting, Epoch, reminds me more of sword & sorcery settings but with a twist. The most intriguing fact is that the setting is partly inspired by Aztec mythology instead of European one. The premise of the world of Epoch is that the free tribes of the Children of the Dawn fight the invasion of the Keepers of the Gate, who are in league with the ghula. The Keepers of the Gate bring with them civilization and magic which both taint the savage lands. The champions of the last free people stand up to fight the demonic ghula and their followers. Epoch is another great example for a non-standard fantasy setting.

The third setting included in Adventure Companion is called Sunchaser which Alex once described as Lord of the Rings on the Mississippi river. And that’s actually a pretty good description. Humans are the newcomers in the Thousand-Rivers Valley, a place thrive with adventure and home to almost all the races described in the Fantasy Craft rulebook. Among the three campaigns in the book it’s the most “classical”. If you’re looking for a high fantasy setting for Fantasy Craft with elves, dwarves, drakes, magic, feudal lords and ancient ruins to explore, then Sunchaser is definitely worth a look.

Each of the three settings contains several pages of background information, new talents, feats and other setting-specific rules, new monsters and an extensive rogue’s gallery. There are even tips for what kind of adventures you could run in these settings. It’s actually astounding to see how many content they managed to squeeze into a 145-paged book. While the three settings are not as detailed as if they released a book for each, they give GMs enough information to make the campaign world their own. I actually prefer this approach to overly-detailed settings like the Forgotten Realms, where every small hamlet had it’s own sourcebook at some point.

The last section of the book contains options for the three campaigns or basically every Fantasy Craft campaign. There are over 150 Specialities, feats, 12 new classes (including Base, Master and Expert Classes), as well as new tricks and Paths. I have to admit the number of new stuff in the last part of the book can be a bit overwhelming but if you’re a veteran Fantasy Craft player or GM you should feel quite at home.

All in all I think Crafty Games’ Adventure Companion is a great product for a reasonable price. The PDF version available at RPGNow sets you back $14.99. The printed version will be available for only ten bucks more later this month. Even if you’re not playing Fantasy Craft right now you could probably make good use of the three campaign settings. The rules options in the back of the book can probably be used in your home brew Fantasy Craft games as well, even if you’re not that interested in the campaigns.

Please note that this review is based on a read through of the PDF version of Adventure Companion which has been provided by the publisher for the purpose of this review.