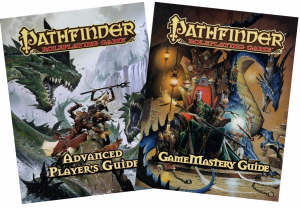 My love for Pathfinder is well known around these parts. It is my poison of choice for fantasy gaming and the rule system I use for my homebrew campaign. Over the last few years I have begun to use technology more and more to run my games and currently I GM with my laptop at the table.

One of the most useful tools I have for this is the Pathfinder RPG Game Reference Document. It lets me reference the rules online and I find myself using it more than the book or the PDF. Imagine my surprise when I navigated to the page today and was surprised by the addition of the classes and rules from the Advanced Players Guide and rules from the GameMastery Guide, including the most wonderful NPC gallery from the GameMastery Guide.

What can I say but thank you Paizo! They continue to provide quality and useful tools for their fan base. Don’t be cheap, this does not replace the books, there is much more in the book itself so don’t sell yourself short. If you don’t want to make a big investment, Paizo has greatly prized PDF copies of both books, so you have no excuse. I think I have a company crush, again thank you Paizo.