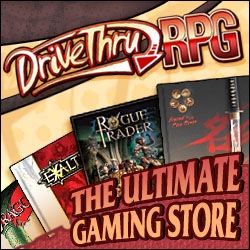 As participants in DriveThruRPG’s blog and podcast program we can again provide you with a 20% discount on several cool products at “the Ultimate Gaming Store”! This discount is valid for the following products only and is good until March 8th. This month’s discount code is FebChatterTwenty11.

In addition to the discounts we have one freebie code to give away that allows you to download all of these products for FREE! In the upcoming days I will post some details on how one of you could get their hands on this code. Stay tuned!

Click onto the cover images below to get directly to the respective product page: