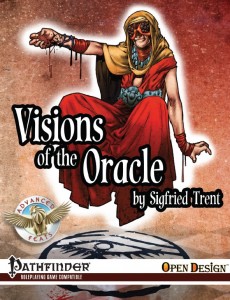 After reviewing the previous installments in the Advanced Feats series and having some of my players try out some of the classes in the Advanced Players Guide, this is the one I was looking forward with the greatest trepidation.

As I’ve mentioned in earlier posts players in my campaign had created replacement characters using the playtest version of the Summoner and an Inquisitor and an Oracle as soon as the book came out. Of the three, only the Oracle remains. Sara, the player who created the character, is a great role player and fashioned a story taking into account the character’s curse and in the short time she’s been playing with us has crafter a memorable character. But at the same time I felt that my grasp on the Oracle class and its role my campaign was unclear. I know this is a common situation when you introduce new classes into an ongoing campaign, but with the Oracle, despite reading the Advanced Players Guide, I felt like this so much more than the others.

I was afraid that Visions of the Oracle would be a set of wonderful feats (I couldn’t expect less after previous outings) for a class with no clear defined role in my game. Imagine my surprise then when, after reading a book of what many would call “crunch”, I felt I had a better idea of what the class could do in my campaign. Sometimes the mechanics can inspire all sorts of role-playing ideas.

I received a review copy from Open Game Design, and it follows the format of previous Advanced Feat books. A class overview, 30 new feats and 3 sample builds. The layout is simple but elegant, very fitting to the theme and mysteries of the Oracle, and the cover… Wow what a cover! I have grumbled about covers before, and they have improved, a lot, but this one takes the prize. Christophe Swal paints an evocative, eerie, Oracle infused with the mysticism of the oracle or mythology while remaining wholly unique. This has become my new favorite cover in the series (Sorry Cavaliers!).

The overview is very good, simple but illustrative for new and experienced players alike. Sigfried Trent’s experience as the editor of the Netbook of Feats is no empty boast; he proves his mantel in the quality and diversity of feats presented in this book. I have said it before; the feats in the Advanced Feats series are often useful to other classes beyond the emphasis of the book, Oracles in this case, but even more so with this outing. Most of the feats are useful for spellcasters and while they can make an Oracle a more versatile and focused character, many are useful to any spell slinger. 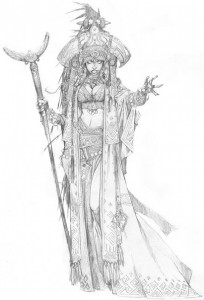 The first two feats Armed Touch Casting, which allows you to deliver touch spells as part of an attack, and Battlecaster, which allows you to make and attack and cast a spell as a full attack action, are two examples of feats that help create character that uses both melee weapons and spells. And there a lot more feats like that, some like Dormant Spell and Magic Sense can be a little trickier in  the hands of certain players, but nothing judicious game mastering cannot deal with.

There are very few strictly Oracle centric feats and those few are very good. The idea of role-playing feats is explained in a sidebar, being feats that impact the role playing aspect of the game, not so much the mechanics. The author recognizes this might not be for everybody but I for one like the Prophetic Dreamer feat and the visions of the future it can bring.

The feats are accompanied with Mr. Trent’s observations and they are not only useful to clarify the feats but give some insight on the process of feat creation. The side notes on Oracles, fortune telling and other details are spot on and are a welcome change of pace as you read the book. There are a lot of feats with new options for spellcasters of all types in this book so consider it no matter what sort of caster you play.

The three builds, The Visionary Healer, the Phoenix and the Savage Seer are three very different versions of the Oracle. One a commoner touched by the extraordinary, an elemental charged powerful caster and the last an Oracle powerful in battle. These last few pages really inspired me and showed me three unique ways to look at the class and in turn gave me all sorts of ideas how to integrate different types of Oracles to my campaign.

Once we retake the Pathfinder campaign in a couple of months, not only will the Oracle’s player have new options for her character, but I will have a better idea where the class fits in the grand scheme of things. Not bad for a 17 page book of mostly “crunch”! If you are a GM go get this book it’s a great addition to your Pathfinder RPG collection. If you play an Oracle you can’t afford NOT to get this, it’s only $3.95. Thank you Mr. Trent for another wonderful product, now all that’s left is the Inquisitor…