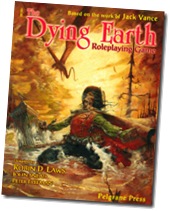 Some time ago Pelgrane Press lost the license to produce the Dying Earth RPG based on Jack Vance’s classic novels. Recently they reacquired the license and to celebrate this, the Complete Dying Earth bundle on DriveThruRPG is now available for the half of its original price. By the way, if you are just interested in the core rulebook, it has been marked down 25% because of the GM’s Day Sale.

The Dying Earth RPG was designed by Robin D. Laws, one of my favorite game designers. From what I’ve seen so far, its focus lies more on social conflicts and interaction than martial conflicts, which is definitely a welcome change. While I have a copy of that game on my shelf I haven’t had the chance to give it a try yet. But it definitely looks pretty cool and I am very interested what Pelgrane will do with it, now that they have renewed the license. Perhaps it’s time for a new edition.

I’ve got Numenera on my Mind