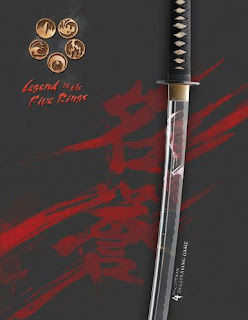 Today, I’m proud to bring you my complete review of the Legend of the Five Rings 4th Edition Core Rulebook. L5R, produced by the folks at the Alderac Entertainment Group (AEG), has been around since the mid 90’s. Now, in the 4th Edition of the RPG, L5R continues to bring top notch stories set in the Far-East inspired setting of Rokugan to the game table. L5R is heavily inspired by Japanese culture, but also draws inspiration from Chinese and Korean history as well. I’ve always been a follower of L5R, some books were better than others, but for the most part, I have always appreciated the attention to detail that L5R has shown in creating a fantasy world which is still somewhat reflective of Japan and other Asian nations. Asian studies is pretty much my thing and it kills me to see people representing Japan and it’s history badly without knowing they are getting it all wrong (it’s something entirely different when they know what they are doing different and recognize that). L5R makes it very clear that Rokugan is not Japan – though you might be playing as a Samurai or a Ninja, the game and the game world are still very much steeped in fantasy. So, today, I’ll be giving a rundown of the 4e Core Book; it’s quite the Tome of Knowledge and has taken me quite some time to get through in totality, but it was well worth it. I have some seriously high expectations for this one, so let’s see if they hold up.

From a purely visual perspective, the L5R 4th Edition core book is one of the most beautiful roleplaying books I have ever seen. To put it simply, the book is visually stunning. Every picture in the book is top notch; even the non-image related artwork is great. All of the text sidebars are amazingly well done and beautiful. This is a book that I have not had a problem laying on my desk; I have had have my Japanese co-workers come by to take a look at it and they were all pretty impressed with the Samurai and Courtier artwork. But artwork alone does not a good roleplaying book make (though it certainly does help). 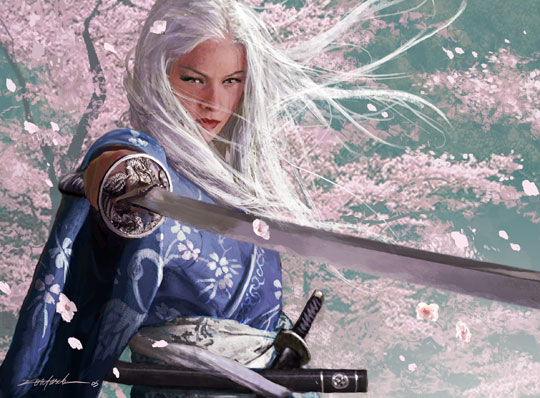 I find the L5R system to be very, very simple on most fronts. L5R uses the roll and keep system – whenever you try to do something in the game, you roll X number of d10 dice and then keep Y number of those dice and try and beat a Target Number (TN). People unfamiliar with how the system works might be a bit confused by the 5k3 abbreviation, which definitely confused me way back when I first saw it, but after you understand the simplicity of the basic system, it all comes together pretty easily. This system is expertly explained in this book, which offers some improvements to the core system from previous editions; however, the system has not changed so much that you would not be able to understand what is going on. The system change from 3rd Edition L5R to 4th Edition seems to me to be much more subtle than some other edition changes that we have seen in the last couple of years.

Character Generation in L5R uses an interesting setup; you choose the type or role your character will fill, whether that be a Bushi (samurai warrior), a Courtier (a member of the court), or a Shugenja (a spellcaster), among others roles, and then from there, you have a multitude of other options to choose from. One of the strongest points behind the L5R character generation system is that all of the mechanical options that you have to choose from, ranging from your clan, family, school, or even just advantages and disadvantages, most have some type of “fluff” or story connected to them. Even some of the more basic advantages have a direct impact on how your character works from a story perspective in the game. I like that a lot.

But, the L5R core book is not just about presenting the L5R system, there is a huge wealth of world and setting based content in this book which you’re going to need if you try and play a game in the world of Rokugan. The book provides a brief history of the world and gives a general breakdown of how each of the clans was formed and where they are now. Each of the clans is given a focus section as well. The setting is vivid and interesting and intrigued me by its mix of both western and eastern mythology. I don’t want to elaborate too much on how much I loved the setting since that could go on forever.

I don’t have a lot of bad comments on this book, but I do have a few, which you should keep in mind. While the book is visually stunning, it is also very easy to damage. I find myself leaving fingerprints on a lot of the pages. Out of the desire to keep a clean book, I have actually found myself wiping it down to keep my finger oils off of it. This isn’t a problem that I have had with many other RPG books and I’d like to think my finger oils aren’t so powerful. I also have the feeling that the book might not hold up quite as well as others over the long term. I have been using the book a lot, and I can already tell that some of the pages are on the verge of coming out. It may just be a flaw in my book’s binding, or it may have been a product of shipping the book overseas, but I’m becoming rather paranoid about letting this book take damage.

Regarding the system itself, I find that most of it works very simply, but I still find the “Raise” mechanic to be a bit difficult to comprehend, no matter how many times I read it over and no matter how long I have actually played the game. If you’ve never played L5R, figuring out how Raises and Free Raises work could be a potential barrier to entry into the game. Also understanding how deadly L5R actually is, can be a bit of a hassle Unless you catch the sidebar which explains how potentially lethal the L5R game can be, you might not understand why your character gets killed after taking one katana to the chest. But, if you read closely enough and catch the sidebar, then you will probably be okay. It’s better to take the time and find the sidebar than go into the game with the trial-and-error mindset of character death.

Setting Wise, I would have loved to have more material here, but there is only so much you can cram into one book. I thought that the clans deserved about double the space that they had been given. Instead of having two page spreads summarizing each of the clans, I would have preferred four or six page ones. The information they provide is sufficient, but it does not meet my wants. Also, the minor clans should have had more space dedicated to them as well. Because I have a lot of the older books, and not a lot of the setting related information has changed with this edition upgrade, I can look back to the older material to find out whatever I need to know about the clans and Rokugan, but new players, starting with this edition, might feel themselves wanting.

I guess to put it succinctly, this is one of the books that I am most happy to have this year. It rolls up all the system rules, character gen, and game mastering tips all into one book. I guess I should mention that the book is 400 pages long. I could see myself running an L5R campaign with nothing but this core book. There are not a lot of what I would consider to be AAA RPG Titles out there which can say that. L5R continues to be, in my mind, the most accurate, fun, and interesting adaptation of Japanese/Asian culture in a fantasy RPG. I would strongly encourage you to pick this game up, get out your ten sided dice, and get into your samurai/ninja/monk/shugenja state of mind. This one is a winner.