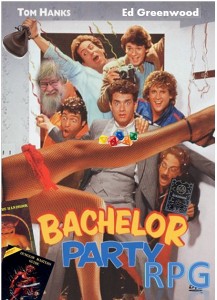 “Rick Gassko is settling down… But before he walks down the aisle with Debbie he’s having on last fling. Accompanied by his friends, some dice, the Necronomicon and his favorite game designer and wild party animal Ed “The Beard” Greenwood, Rick will have an adventure he will never forget. Literally… Bachelor Party RPG!”

No, I’m sorry to disappoint, this post is NOT about a role playing game based on the “classic” Tom Hanks movie Bachelor Party. This post is about something much more personal. On a recent post where I reminisced about Alternity, talked about gaming and how what we play becomes intertwined with what we are doing in real life and, at least for me, are part of the memories.’

When I got married I decided I wanted to do something special for my gaming group. After a botched “traditional” bachelor’s party, the day before the wedding I gathered up all of my friends and we drove out to the small local hotel up in the mountains where the wedding would be held. While family and friends got busy prepping for the next day’s celebration we took out our gaming books and die and sat around a table to role-play.

(Hey don’t look at me like that, it was my wedding… I was entitled to relax, have fun, and not work before the wedding!)

There they discovered a secret hidden away by their old characters, and learned about the friendship and camaraderie that allowed them to overcome those obstacles. In turn their current characters had to come together and strengthen the bonds that brought them together. During that adventure the characters became closer friends and explored they were working together for common goal.

I wanted to highlight the importance of friendship as a not so subtle message to my friends that their friendship was important. We gamed into the night and afterwards spent a good deal of time talking about the game and about the wedding and about the changes it would bring to my life. And it did bring change, and despite the distractions, the happy times and the less happy one (of which there were not many!), I kept gaming.

We share a lot around the table and friendships are forged in the game. So if you can I encourage you to plan a special game, on special occasion, share a game. It’s one of those things you will not forget!

I am no longer married, the why’s and how’s are not important, but some of those players that gamed with me that night are still sitting at my table every week, and the ones who are not remain friends. So I’d like to dedicate this post to Pierre, José, Luis, Emilio and Guaro who sat that night to play in my Bachelor Party RPG. To my current players, be aware, when I tie the knot again I’m repeating the experience!

Have any of you done something similar? Celebrated a real life occasion in a game? I’d sure like to know…

And you know what, that game I made up at the beginning of the post; it might not be so bad after all… On second thought, no it would be horrible!

PS – If you have not seen the movie that inspired the post’s title, don’t worry you are not missing much. Still if your curiosity has been piqued and you will not heed my warning, here is the trailer:

The A-Team: A model for RPG campaigns?