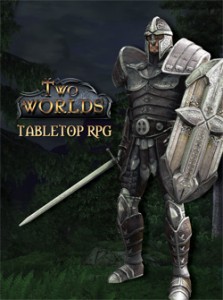 Two Worlds is an action RPG for PC and Xbox 360. In 2007 RPGObjects created a pen&paper roleplaying game based on that game that was included in the Collector’s Edition of the game. They are now releasing this game for free at their site. You have to register an account there to download your copy of the 74-page PDF.

The PDF itself is looking pretty nice and obviously uses artwork from the game but the layout is really not my cup of tea: a one-column layout and a font size that even my grandma could read with her glasses off. And the font used (reminds me of the font used in Blizzard’s Diablo) probably causes eye cancer. Aside from that, the Two Worlds RPG could be an interesting entry into the pen & paper roleplaying hobby for fans of the video game.

The game uses Fantasy20, a variant of the d20 System which was probably the most logical choice for such a project.

Please note: There is also a version of that book optimized for print but I couldn’t download it. It is possible that this version uses a more readable font and better layout (but I doubt it). If you have more luck downloading the print version, please let me know.