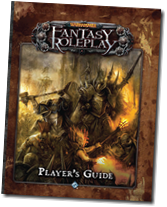 I haven’t been aware of the WHFRP Player’s Guide until I got a coupon code for a review copy in my email inbox. But I have to admit it was a pleasant surprise. Even though I changed my stance on the latest iteration of Warhammer Fantasy Roleplay there where still a few things that irked me. The new Player’s Guide remedies a lot of the issues I had with this game before.

As with all recent Fantasy Flight Games products, the 306-paged WHFRP Player’s Guide looks gorgeous. I haven’t seen a printed copy yet since this review is based on a PDF copy, but I am sure it will be of the high quality we have been seeing from FFG products for some time now. The artwork is of great quality although I think some of it is reused from the rule booklets of the WHFRP boxed set. In some cases I remember the artwork from even much older products like the original Games Workshop edition of WHFRP.

But what exactly is the Player’s Guide? It basically contains everything you need as a player to play Warhammer Fantasy Roleplaying. This includes all the rules needed to create a character and play the game. There are even guidelines that allow you to play and run the game if you don’t want to use the cards and tokens from the boxed set. Only one copy of each the Player’s and Game Master’s Guide plus a set of custom dice is needed and you are good to go!

The Player’s Guide covers character creation, the games rules (including combat, advancement, arcane and divine magic), equipment, and an overview of Warhammer Fantasy Roleplay’s classic setting, the Empire. There have been a lot of great reviews of the original WHFRP boxed set all over the net, that explain how the WHFRP system works, so I won’t go into details here. Basically it uses a dice pool system using custom dice which has a surprising depth and complexity. The career system from earlier editions is still intact although it has been streamlined. The probably biggest change from earlier editions of the game is that even newly-created characters are much more capable than in Warhammer Fantasy 1st or 2nd edition.

Contrary to my initial expectations the combat system has moved away from the game’s miniature gaming roots. In WHFRP you don’t use a map or grid at all, distances and movement are abstract, and there’s no set time for a round. At GenCon 2010 I had the chance to play WHFRP with Mark Meredith, his wife Bridget and Jeff Uurtamo. While we all struggled with the rules a bit, we all had a lot of fun and the dice pool mechanic actually encouraged colorful descriptions of our action’s results.

What really makes the Warhammer Fantasy Roleplay Player’s Guide a must have product in my book is Chapter Fourteen (“WFRP Lite”), and the appendix which makes up for pretty much half of the page-count. Chapter Fourteen gives the GM and players some guidelines on how to run the game without using all the fiddly bits and pieces. Of course a lot of players might actually prefer to run the game with all the action cards and various tokens, it’s nice we finally get at least the choice to not use them. FFG also included an expanded character sheet and an action card worksheet at the end of the book, which will definitely make it easier to run the game in this “Lite mode”.

The appendix contains all the actions, talents, party sheets and careers from previously released products such as the Core boxed set, the Adventurer’s Toolkit or Signs of Faith. Even if you already own several of the listed products, the appendix can still serve as a great reference tool for the players and GM. The book concludes with a 4-paged index.

Considering the massive content and the great artwork the price of $49.95 for the print version seems more than justified. Alas the price of the PDF version is a bit too high for my taste. $25 may be much cheaper than what you have to pay for the hardcopy, but $10 or $15 would sound more reasonable to me.

Even if you are a veteran WHFRP 3rd Edition player/GM the new Player’s Guide might be worth a look. Having all the rules in one book and being able to reference all the actions and talents without shuffling through hundreds of cards is just priceless. If you are a new player or more of an old-school guy, the Player’s Guide may also be an interesting read. Using the “WFRP Lite” option allows it to play the game more like a classic pen & paper roleplaying game. Not having to bother with all the fiddly bits and pieces may be more comfortable to some players.

If you have been thinking about getting Warhammer Fantasy Roleplay 3rd Edition for a while now, but the high price of the Core Set has kept you from actually buying it, the Player’s Guide and the Game Master’s Guide might actually be an alternative. Although the Core Set is currently available for the reduced price of $62.97 at Amazon.com, but when you consider that the Player’s Guide contains a lot of material from other sets as well (like the Adventurer’s Toolkit) it’s still a great deal.