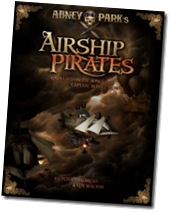 I was really surprised when I read on the German blog Rollenspiel Almanach that there’s already a PDF preview of Abney Park’s Airship Pirates RPG. When I first heard about the game, I thought the release was still far away, but it seems I was wrong.

The game will supposedly use a variant of the Victoriana 2nd Edition rules, probably the one already used in Dark Harvest: Legacy of Frankenstein. I already love the look of the book and setting seems to be pretty interesting as well. Abney Park’s Airship Pirates is a game I will check out when it’s out.

And yes, Abney Park is the steampunk band, you might already have heard about. Their band leader known as Captain Robert is actually the one who’s doing the layout for the game and as far as I know the whole band was involved in the design of the game.

It’s too bad I don’t really like their music, but the RPG definitely looks intriguing.