I just learned about a new patronage project over at Open Design: Dark Roads and Golden Hells. It will led by Northlands’ designer Dan Voyce. So what will the new book be about?

Welcome to the Multiverse! 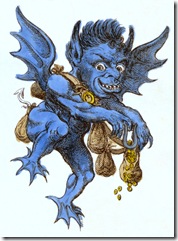 Open Design is opening a portal to new demons, killer angels, and the strange landscapes of the planes, from the hells to the shadow plane! Led by Dan Voyce, the designer of the outstanding Northlands sourcebook, this patron project will examine playable sites such as the Vault of Mammon and reusable NPCs suitable for planar journeys, as well as new gear, spells, and hundreds of adventure hooks!
With development by some of the Planescape campaign setting crew and contributions from Paizo’s planar designers as well, this will be an outstanding book for anyone interested in the planes. As always with Open Design, supporters are invited to brainstorm, pitch, design, and playtest the material as much or as little as they like, resulting in a stronger book (as proven by Open Designs 6 ENnie Awards in 5 years!).
Step out on the Dark Roads and visit some Golden Hells: adventure calls!

For more details on the project check out the official announcement at the Kobold Quarterly Blog.

Crafting at the Tabletop