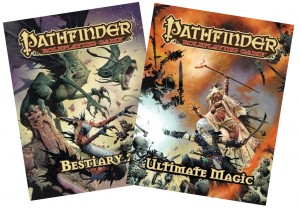 The new class for the Pathfinder RPG keeps catching me unaware. As I wrote when the play test began, I had no idea that Paizo added the open content of the recently released Bestiary 2 and Ultimate Magic to the Pathfinder RPG Reference Document. I went to the website to research some ideas for my fantasy campaign, that while it is technically in hiatus, I cannot stop tinkering and planning for; imagine my surprise when I found out that on June 27th they had added this content!

Besides the Magus class, they included the options for the magi using classes, feats, spells and a new magic sub-system based on Words of Power, and so many new monsters… I buy all new major books for Pathfinder, both in print and in PDF. I’m a believer and supporter of Paizo’s pricing structure for new books on PDF (most of the major releases are $9.99) so I make sure I put my money where my mouth is. Still the Reference Document is an invaluable source, I consult it constantly during the game, and since I’m Game Mastering from my laptop it’s the gaming site I probably use the most.

I have said this before, but I think they deserve it, thank you Paizo! Your continued support of the community, through play tests, prompt updates of the Reference Document and the sense of camaraderie they foster on their site and message boards is greatly appreciated. I am a big fan, and In case you are too (and like me you had missed it) enjoy!

PS – Walter (I have not had the pleasure to meet him but thanks!) wrote a Guide to the Magus on the Pathfinder SRD with a nice overview and analysis of the class. I’m also writing a review of Might of the Magus from Open Design that should be ready soon, so I’ll be coming back to this class soon…

Pre-pre order Ashen Stars now and get a lot of cool stuff at release!