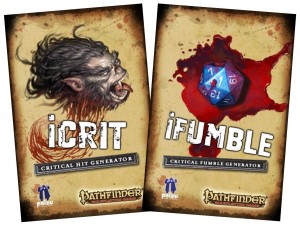 If you are a Pathfinder RPG fan like me you might already know this, but just in case you missed it, Paizo launched applications based on their Critical Hit Deck and Critical Fumble Decks for your iPad or iPhone. The iCrit and iFumble (I’ve read some criticism of the names, but what the heck it’s an iWorld after all!) are digital versions of the real deal. If you own the decks they may not seem that useful, BUT they keep you from having to take the decks along to the game, and at $1.99 they are cheaper than the real thing.

I already do most of my GMing digitally so these are no brainers for me. I also own this Pathfinder SRD app which lets me plan for the game from my phone. That coupled with PDF readers and dice rolling apps make my life so much easier. With two iPhones and two iPads among me and my players I have a feeling these little apps will see a lot of use when we go back to playing Pathfinder.