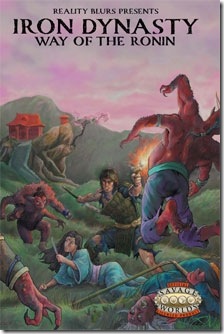 Today I am going to give away a free PDF copy of RealityBlurs’ awesome Savage Worlds setting “Iron Dynasty: Way of the Ronin”. If you want to learn more about this great game, check out my review.

So, what do you need to do to get this fine game? At first you need a DriveThruRPG account. This shouldn’t be a big deal. But in addition to that you have to answer a simple question:

“What did Sean Preston, founder of Reality Blurs, have for breakfast this morning?”

The first person who posts the correct answer into the comments below, will get a free PDF copy of Iron Dynasty. And while you’re at it, why don’t you follow the official Reality Blurs Twitter feed? Good luck!

UPDATE: The question has been answered and the copy has been given away! Congratulations to Glenn aka DustDevil75.