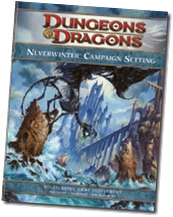 Not long ago, Wizards of the Coast released the Neverwinter Campaign Setting. It expands upon the information presented in the Forgotten Realms Campaign Guide, released in August 2008, while providing a standalone foundation for adventures set in the region surrounding the formerly great city of Neverwinter.

It’s good. You should get it.

Now, with my review out of the way, I would like to discuss the reason we are all here: Oghma’s Faithful.

Oghma’s Faithful is one of thirteen new themes presented in the book. Each theme ties into the setting in a far deeper way than its predecessors in the Dark Sun Campaign Setting. These are not simply occupations or random circumstances; they are reasons to be involved in the story at hand. In addition, each theme provides a power, item, or other benefit at 1st level, with a handful of other boons rolling in at 2nd, 6th, and 10th level.

Choose a language you have heard or seen within the past 24 hours. Until the end of the encounter, you can read and understand that language.

If you had chosen to make your character a Harper Agent, he would receive a magical pin with the blessing of one of three goddesses. An Iliyanbruen Guardian can drag a friend along when she uses fey step. The Pack Outcast can turn into a wolf.

The 1st-level feature of Oghma’s Faithful is not only substandard when compared to the other themes but also when taken on its own. As I have previously mentioned, language is a tricky business in RPGs. Any fantasy game worth its salt tries to have at least half a dozen, yet few if any provide a sensible, meaningful implementation of the difference between languages. Typically, languages in role-playing games offer an additional level of complication for a minimal return in entertainment.

Oghma’s Faithful manages to be useless on two levels. If the gaming group does not deal with the different languages in the game, then the theme’s ability is pointless. If the group does care about having Elven, Giant, and Supernal exist, then Oghma’s Faithful pulls a fast one and renders those differences null and void. Naturally, the DM can always construct a horribly contrived encounter where the character is faced with several languages at once, but it will quickly become old hat if repeated.

It breaks my heart to read the two-page spread of the theme. My dark secret is that I love Oghma’s Faithful. It is without a doubt the theme I find most appealing. I would like to think… no, I really do believe that whoever designed it put a lot of heart into it and shares my own love of learning and language. He wanted to say “See, here is a theme for those of you who want to play a badass scholar driven by divine visions.”

Unfortunately the horrible truth is that it just doesn’t work, because languages in RPGs don’t work. Oghma’s Faithful is just another heart-wrenching reminder.