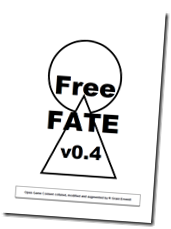 Recently I decided to switch to Free FATE for my current FATE games. This has mainly three reasons:

Some people might say that my first reason is moot, since not every player needs a copy of the rules. That’s of course true, but some players are interested in reading the rules themselves – which I support if possible – but I just couldn’t lend them my book because I needed it to prepare for the next session. And SBA with it’s 600+ pages is not what I would consider “light reading”. 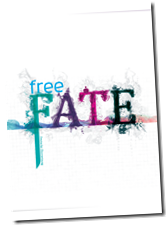 Free FATE is basically the shortest version of FATE I could find that doesn’t oversimplify things. I especially like the way stunts are handled. Instead of listing dozens of individual stunts Free FATE provides you with guidelines for your own stunts.

From what I’ve seen so far the rules presented in Free FATE are 100% compatible to Starblazer Adventures. So the switch from SBA to Free FATE should be pretty painless.

By the way, Free FATE is one of the few games where the German translation is actually better looking than the original one. While R Grant Erswell did a great job collating, modifying and augmenting the FATE rules, he’s layout skills are not up to par. It would be awesome if Kathy Schad, who did the layout for the German translation, would give the English original a facelift as well.