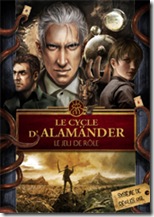 On the D101 Games site I found a link to a free OpenQuest-based game. The game is obviously set into the world of a French fantasy book series by Alexis Flamand which combines humor, criminal mysteries and fantasy – or at least that’s what I think the French descriptions said.

The 44-paged “Système Alamänder” is a beautifully laid out PDF that makes me wish I was fluent in French. Alas I am not, so the only thing I can do it look at the pages and admire them. 🙂

In the case you speak French and if you have perhaps even heard about the book series you should have a look at the “Système Alamänder” and after that please come back here and let me know what you could learn about it.

Damn, I wish my games were looking that great!