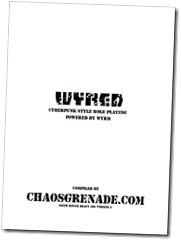 I think I have talked about WYRED before. It’s a cyberpunk roleplaying game written by  R.E. Davis aka Rev.Lazaro and powered by the Wyrm System. Today he released two new versions of it:

Rough Draft 5 is the final iteration of the normal d6-based rules. But he didn’t stop there. Rough Draft 6 uses a new d12 mechanic, which is something I actually planned for the SF variant of Wyrm. From what I’ve seen WYRED has a lot of promise and if you are into the genre you definitely should check it out!

You can get the details on both releases here.