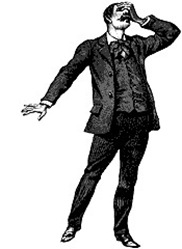 I am sure a lot of you have found my blog for the first time after they heard about one of my game designs. Especially Warrior, Rogue & Mage has been pretty popular and I am also quite happy with how Arcane Heroes turned out. Aside from those two games I’ve designed a few others that were interesting enough to be posted at my Stargazer Games site. But there’s a whole library of unfinished ideas, games that never really worked or that I abandoned to work on something else.

My archenemy is surely what I call “game designer attention deficit disorder”. It usually sets in after I’ve started on a new project. And suddenly something else attracts my attention. “What’s this? A new game? An interesting new concept to borrow? How could I make this work with my system? Ohhh, shiny…” Usually my project comes to a sudden halt at that moment. I stumble upon a game that I like and at once my brain starts to salvage that game for ideas. The attempt to incorporate these ideas into what I am working on right now usually fails and I get frustrated. This frustration often makes me abandon the project and move on. Until I find the next distraction. Rinse and repeat.

There have been some cases when I was able to avoid this. In the case of WR&M a few good friends helped me to get through with it. Without them this game would probably never have seen the light of day. Another way to avoid this is to compress the whole design process into 24 hours or less. Then I just don’t have any time to digress. My first draft of WR&M and Arcane Heroes are great examples for this. But I have to be in the right state of mind to pull something like this off.

A problem closely related to the game designer ADD is that recently my designs tend to look like clones of existing games. This doesn’t happen on purpose but it’s probably a side effect of me reading a lot of roleplaying game rulebooks for reviews. Some time back I discovered the excellent FU RPG and without noticing the game rules I was working on at the time slowly started resembling FU. A more recent example was the Mistborn Adventure Game Primer. I read the rules and was blown away. It already shared a few concepts with a game I am working on and I really had to fight the urge to borrow too much from what I’ve read in said primer.

I am no professional game designer. Writing games is a hobby for me, not something that pays my bills, so it’s not something that puts me in real peril, but the fact that I always face the same problems when working on a game design is driving me up the walls. I have a lot of ideas what I would love to do but I also think I put too much stress on myself. Which is pretty silly because I doubt anyone expects me to churn out great game designs every other month or so. What I really would like to know how other people handle these issues. Perhaps some of you want to share your thoughts on that matter. As always any comment is highly appreciated!