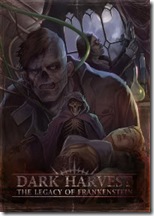 Dark Harvest: Legacy of Frankenstein is undoubtedly one of the most impressive games I reviewed this year. It stands out from a lot of other games because of its unique alternate history setting that combines elements from the classic novel “Frankenstein – The Modern Prometheus” with real history. For more information on this awesome game, please check out my review and the interview with author Iain Lowson.

And I am quite glad that there will be more support for this great game in the future. The beginning will be made by “Resistance”, which should be out by May 2012. There’s already a small sample of this first LoF supplement available at the official site, so check it out. And it seems Colin Chapman, who is known for his post-apocalyptic roleplaying game Atomic Highway (which he’s now giving away for free!) and who has written the first supplement for my own Warrior, Rogue & Mage, will be involved in that project. Colin does great stuff, so I am sure “Resistance” will be great as well.

The other news is that there will be a LoF card game. How cool is that. Iain Lowson hasn’t shared any details yet, but it will not be a CCG, which is great in my book. According to the announcement on the official LoF site, it will be more light-hearted than the rest of the LoF material. I am not sure if it will be family-friendly though. Actually I doubt it.

Last but not least there will be a LoF short story anthology! Yay! That’s great news. The short stories in the original Dark Harvest book were awesome and I am definitely looking forward to this anthology. Hopefully there will be a Kindle edition as well. 🙂

If there are any questions regarding these future releases, feel free to post them in the comments below. I will convey all your questions to Iain Lowson in hopes he’ll share a few more details with us.