Recently I was made aware of some pretty cool dice roller widgets created by Awesome Dice for WordPress. There’s a D&D Dice Roller Widget created with D&D or Pathfinder in mind. As you can see to the right, you can customize the title of the widget and also choose if you want to allow the use of modifiers. When included in the widget area of your site, it shows a Roll button and a list of results. When a natural 20 is rolled you get alerted by a big red CRIT notice. Nice. 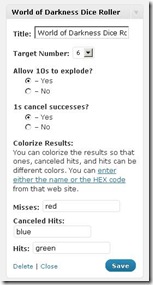 The second available dice roller widget was created for White Wolf’s World of Darkness. Again you can choose the title of the widget. But in addition to that the widget lets you set the needed target number, if 10s are allowed to explode, you can toggle whether 1s cancel successes or not, and you can even colorize results. Very nice indeed.

My blog’s widget area is already a bit overcrowded, so I doubt I will include these dice rollers on my own blog, but they could come in handy for anyone interested in running or playing games online.

And if you need an all-encompassing solution, Awesome Dice has something for you, too. The Gaming Dice Roller let’s you roll any number of dice from d4s to d%. It doesn’t have the added functionality of the WoD Dice Roller, but is probably your best choice if you play neither D&D nor WoD.

All three widgets are available as plugins from WordPress.org (I included the links in the text above).

If you want to see the widgets in action, check out the Awesome Dice blog.