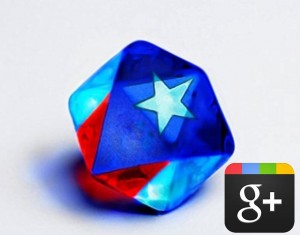 If you regularly read my posts you’ll have noticed that from time to time I talk about the Puerto Rico Role Players group. Along with writing here in the blog, that group has been a big part of what’s motivated me to become more active in promoting and sharing with others my love for role-playing games. It started out as a Facebook group (back when Facebook had locations by city or region) and has gone through three versions as that social network has changed its platform.

I know there are a lot of people who dislike Facebook, their policies and what not. Some have migrating to other social media like Twitter, Diaspora or Google+, but I’m still there. Somewhere (and I just can’t find the source right now) there was a report that said we Puerto Ricans still predominantly use Facebook over other social media options.  So my staying makes sense. I keep in contact with a lot of friends, and there is an active community of my fellow islanders in said service.

Facebook has also served the group well; we went from almost disappearing about three or four years ago to a group with over 370 members. Still there are limitations to what can be done there and we’ve begun to take the first tentative steps into the broader social media landscape.

We have created a Puerto Rico Role Players page in Google+, in an attempt to share information about upcoming activities and other important RPG news with our circle of followers, which is still small but hopefully will grow in the coming days and weeks. We also have a Gmail account for the group, prroleplayers@gmail.com where we can be contacted.

I don’t think I have mentioned it before but we also have a presence on Twitter, @PRroleplayers that account is run by none other than our Boricua in exile Daniel Perez, also known as @Highmoon, who was instrumental in the creation of spaces where gamers in Puerto Rico could communicate and for that we owe him and continue this journey.

We’ll also soon be re-launching a website a fellow Puerto Rico Role Players member created which is undergoing some modifications, so I’ll make sure to write another post when that happens.

Are we leaving Facebook? No! I think it has been, and for the foreseeable future, will remain our main contact point. But now there are other options to reach those Puerto Rican role-playing game fans that may not be in Facebook.

Dear reader, I have one request to make of you… If you know of a role-player from Puerto Rico who may have not heard of us will you be so kind and point them our way? We will appreciate it!

Help the guys from 6d6 Fireball test their Affiliate system!