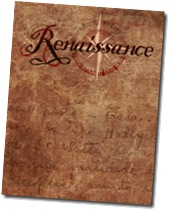 Yay! I have been waiting for this since I first read about it: Renaissance is a free roleplaying system designed for historical and fantasy games in, as the authors put it, “age of blackpowder weapons”. It was created by Peter Cakebread and Ken Walton who are known for Clockwork & Chivalry 1st Edition and Abney’ Park’s Airship Pirates. Renaissance is based on D101 Games’ OpenQuest which itself is based on Mongoose Publishing’s Runequest SRD.

The 139-paged PDF contains all the rules needed to play, two magic systems and a bestiary. Kudos to Cubicle 7 and Cakebread & Walton for releasing the rules for free. The PDF doesn’t contain any artwork, but that’s negligible especially since the PDF is mainly meant as a System Reference Document. The rules of the game can be used under the OGL.

If you are a fan of Chaosium’s Basic Roleplaying and Runquest, you actually have the choice between quite a few different rule variants now. There’s Renaissance, Mongoose Publishing’s Legend, D101 Games’ OpenQuest, Chaosium’s Basic Roleplaying and Goblinoid Games’ GORE. All those games are more or less compatible, so you can use material designed for one game in the other with ease.

Renaissance looks pretty interesting because it was created with the Renaissance era in mind. The magic system also looks pretty unique. If you’re looking for a skill-based RPG with a percentile dice mechanic, you should definitely check Renaissance out!