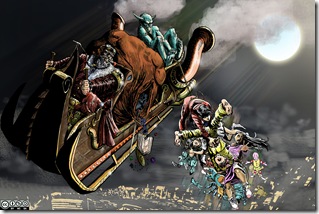 Some of you may have heard about Krampus, that mythical creature that somewhat resembles the devil that accompanies St. Nicholas during the Christmas season. While Santa Claus hands out gifts to children who have been nice, Krampus’ job is to stuff nasty children into his sack and carry them away to devour them. Yum! 😉

In Austria, southern Bavaria and South Tyrol young men dress up as Krampus in the first week of December to participate in so-called Krampus Runs (Krampuslauf) where they roam the streets frightening children with rusty chains and bells. Usually these runs are in the night of December 6th (Krampusnacht).

During the Inquisition attempts were made to stamp the tradition out. Dressing up like a devil-like creature was actually punishable by death back then. And even in the early 20th century the practice was discouraged by the Austrian government.

But what if there’s a deeper reason why people try to stop these Krampus Runs? What if the costumes and the runs are actually part of a cannibalistic ritual from the dawn of time? Thinking about this for a while gave me a few ideas for a Call of Cthulhu scenario.

An adventure could start by a group of investigators coming into a remote village in the Bavarian Alps. There have been rumors of children disappearing during the first week of December. While most of the families are concerned, a few influential families downplay the whole affair.

Looking closer into the child disappearances, the investigators realize that they all vanished during the Krampuslauf and some witnesses claim they have seen someone in a Krampus costume carry a large sack into the woods.

The investigator’s job is now to find out what actually happened and – if possible – save the children before it’s too late. What the cult does is up to the GM. Perhaps they sacrifice the children to summon a horrible creature, or they use an evil ritual to transform themselves into the mythical Krampus. Another possibility is that – when the stars are right – the young men actually transform into the Krampus unwillingly and have to consume the flesh of children. When they awake the next day, they don’t know what they did.

Of course I am sure that the actual Krampus celebrations are perfectly harmless. The worst thing that could happen to a celebrant participating in a Krampuslauf is probably a hangover after drinking too much Krampus schnapps. I wouldn’t rule out a few broken bones either. But when you look at it through the eyes of a Call of Cthulhu game master, things are much more sinister than they seem at first glance. 😉

This post is part of the Nevermet Press Krampus Christmas Carnival. The artwork used in this post was created by Steven Austin especially for this event and was licensed under a Creative Commons Attribution-NonCommercial-ShareAlike 3.0 Unported License. More details on the Carnival can be found here.

And before I forget it: Happy Holidays!

P.S.: And when you’re at it, check Corvus’ post “The Mythos is Everywhere” on more ideas how to introduce Lovecraft’s nightmares into … everything!

My thoughts on the new D&D “red box”