Have you ever dreamed about creating a Google Maps style map of your campaign world? My friend and fellow RPG blogger Zakharov Sawyer recently told me about mashupforge, a new service that allows you to do just that. You can even add markers with descriptions about the various places on the map. This can be a very handy tool, especially when you use a laptop or tablet PC at the game table. Below you see a map created by Zak: 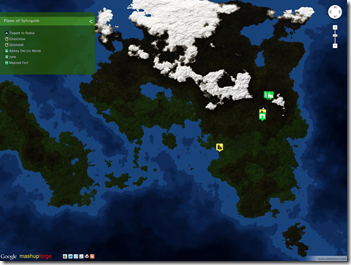 If you want to check out the map in all its interactive glory, follow this link. Mashupforge is currently in beta, and they’ll probably add more features in the future but if you look for an easy and free way to turn your campaign map into an interactive map in the style of Google Maps, mashupforge is definitely worth a look.