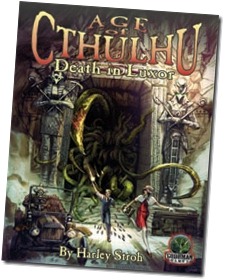 Even though I am still on vacation I wanted to give you a short update on what I’ve been up to lately. For the most time I have celebrated Christmas with my girlfriend’s and my family which means we had a lot of great food and spent hours talking, laughing and playing games.

My girlfriend and I played a lot of Star Wars: The Old Republic recently, which is a lot of fun. It’s the most immersive MMO I’ve played so far and Verena and I are enjoying it immensely. The game also makes me want to run some Star Wars pen & paper game, but at the moment, I have neither the time nor the players needed to start a new campaign.

On New Year’s Eve I’ve run a Call of Cthulhu game for a couple of friends. I picked the first episode of the Age of Cthulhu campaign by Goodman games, which has an interesting story but has some issues that made it harder to run than I expected. But we still had a lot of fun.

And there’s something else I want to tell you about. I got a very special gift this Christmas. Some of you probably know that I am interested in astronomy that’s why I picked the nickname Stargazer a couple of years back. I own a small telescope but I don’t go out watching the skies as often as I would like. So my girlfriend thought she gave me some incentive to do so. She gave me a star as one of her Christmas gifts! One star in the Draco constellation is now registered1 as “Stargazer’s World” and I have the documents to prove it. So, next time you look up into the sky, look out for “Stargazer’s World”. 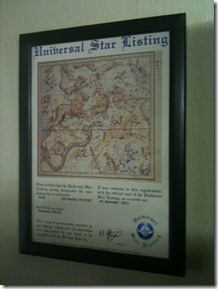 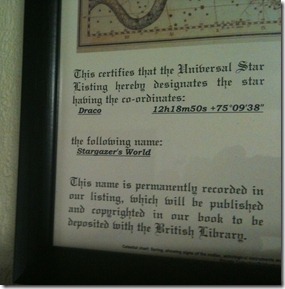 1) Yes, I know that only the IAU can actually name stars, but I don’t mind. And the deed really looks great on the kitchen wall.