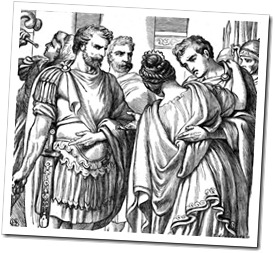 On the weekend my girlfriend worked on the campaign world for our upcoming Shadow, Sword & Spell game. I am actually very happy with the result so far and aside from a proper map I have almost enough material for the next step.

The next step will of course be character creation. When I know what kind of characters my players want to play and more importantly what their goals are, I can put some more work in the world itself. But instead of fleshing out everything, I’ll focus on what I need to run an interesting game suited to my player’s characters and their goals.

I also decide that instead of running a pure sandbox game I will probably use what I call the “Elder Scrolls method”. The Elder Scrolls computer games are basically sandbox games at their heart with a main plotline tacked on. So while you can explore the world at your own pace and set your own goals there’s also a plot to follow. The Elder Scrolls also differs in another aspect from a pure sandbox game. Some events only happen when they are initiated by the player. I will probably use this approach, too, mainly because both my players and I are not too familiar with sandbox gaming and a more plot-based approach may make things easier for us until we are comfortable with this mode of play.

The campaign world – which still lacks a proper name –  was inspired by many sources including Imperial Rome, the Elder Scrolls computer games, the works of H.P. Lovecraft and even – don’t laugh – The Sims Medieval. It might not be as unique as some other campaign settings out there, but I think it’s interesting enough to play in it. The focus on the campaign will be the Imperium Turelium, which is loosely based to the Roman Empire. Other important nations are the Barbarian Realms to the north, the nomadic culture of Akilah and the mysterious Dragon Islands which are supposedly ruled by a cult worshipping entities from beyond the heavens.

Yesterday evening I actually started transferring my notes into a campaign primer that I want to give to my players so that they better understand the world we are going to play in. Here’s a short excerpt from the history section:

Some say that the world has been doomed from the beginning and that everything humans have built over the millenia will inevitably turn to dust, everything we have learned will be forgotten and the one who has been cast from the skies will rise again and turn the world into hell.
Long before humankind walked the earth the gods cast out the Great Old One Tornasuk also known as Cthulhu from beyond the heavens. He now lies dreaming, deep below the waves of the Mare Tranquillitatis, in the city of R’lyeh, waiting for the day when the stars are right and he can rise again and rule over the world.

Yes, Cthulhu and some other Mythos entities will play a major role in that world. And even though I cited the Elder Scrolls series as one of my inspirations, this will not be a high fantasy campaign. The magic level will definitely be lower and the overall tone is much darker and more gloomy than in a regular fantasy game. But the players will be able to make a difference if they wish to do so. This is not Call of Cthulhu after all.

As soon as I have turned more of my notes into a proper campaign primer, I’ll post updates here on the blog. And if there’s enough demand I might even release the whole setting in PDF form later this year. But I first need to sit down and draw a map now. You can’t have a proper sandbox game without a map, or can you?