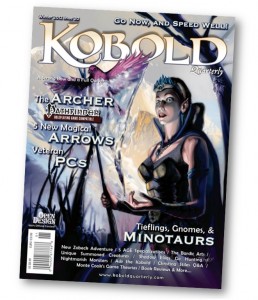 “The Winter Kobold is coming!” If those were the words of House Stark, Eddard would have faced a different fate! Because the know Kobolds are powerful, dangerous creatures. Well at least that’s what Wolfgang Baur, the folk of Open Game Design and all the authors and contributors make me think issue after issue. I am a fan of the magazine and they keep pushing the envelope and producing quality content consistently. But let’s leave strange references to A Song of Ice and Fire behind and dive in into the issue at hand!

The theme this issue is archers and its well served. Let’s see, it opens with the Elven Archer, a race specific class for the Pathfinder RPG. It’s an interesting mix of the ranger and the rogue that fits a traditional fantasy niche. The article has some typos (and you all know I’ve got plenty of those, so I shouldn’t be nitpicking), but I found it interesting and it’s a perfect fit for my long running campaign. The notes on adapting the class for other races, cultures, or even weapons make it useful in other contexts. There is also an article on magic arrows, which again provides what in my mind are some archetypical magic arrows. These two articles seem plucked from my adolescent love for RPGs updated for Pathfinder.

What else is there? Read on to find out…

Other Pathfinder articles include a collection of ooze themed spells and familiars, including the ooze magic school. Four new terrifying low to mid-level creatures that range from the creepy to the terrifying, a fifth level adventure, which begins with some railroading, but this a is a short adventure and due to length I’m willing to overlook it, since the rest is really entertaining. An article on older adventurers, including feats, which makes me reconsider the possibilities of my concept for the old hero and another one on Midgard themed fey hunters, with lots of campaign flavor BUT easily adaptable to any campaign.

But my favorite Pathfinder article (even more than the archery themed ones simply because this one is just so much more useful for me as a GM) was the article on four fully fleshed planar allies, with details on what negotiations with them would entail, personalities. Kudos! The weird article award goes to magical fish one for Pathfinder. You eat the fish and get some magical effect, from removing curses to permanent ability boosts, weird, interesting but weird…

For AGE you have 5 new specializations for the game’s classes. I love to see Kobold Quarterly expand the possibilities of this terrific system.  For D&D 4th edition there is a bard themed article, new utility powers for gomes, tieflings and minotaurs (a race near and dear to my heart), and an article on nature spirits, dual-statted for Pathfinder. The recent announcement of D&D Next/5th edition has made me take another look at the rule set, wondering what will be part of the new game. Whatever happens I hope in the future Kobold Quarterly gets to support all the games they already do and the new D&D!

There are systemless advice articles, like Monte Cook’s on the role of the GM. It might not be the most original, but there is some solid advice in there and he did bring up some interesting issues to consider. The mechanic for time sensitive adventure, called haste points, seems interesting, but I would have to test it out, I’m not sure how it will play out. The idea is solid and well presented, but they are something else to track in game and I’m not totally convinced I need that. The regular cartoons are here, funny as usual, I love Stan!’s humor, and I particularly liked D20 Monkey’s this issue, juvenile but funny. Read it, you’ll see. And of course, the closing one page article on the City of Zobeck by the one and only Jeff Grub!

The magazine is 84 pages long, full color, with terrific art, great layout and an appropriate ratio of articles to adds. I’ve said it before, it’s reminiscent of the old Dragon Magazine, but this is not a magazine just for the grognards like me, but for all fans of the major fantasy games out there. You can get the PDF of Kobold Quarterly #20 for $5.99 or the PDF+ Print bundle for $8.99, or better yet subscribe, well worth it in my opinion. Thank you for the makers of Kobold Quarterly for providing a review copy!