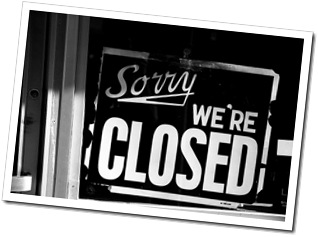 Sometimes I feel a bit sad about the fact that I have no local gaming shop where I can browse through the latest RPG products, talk shop with the regulars and join into store-organized games. But I usually come to my senses real quick and remember the gaming shops I’ve known over the years.

The common myth is that local shops are getting killed by online shops, but in my opinion this is only part of the truth. Over the years I’ve come to realize that FLGS death is at least 50% suicide.

Let me start by telling you about the shop I regularly visited during the late 1990s. It was a small, dark and pretty cramped store in a backstreet about 15 minutes on foot away from the train station and every other major store. So if you didn’t know about it’s existence in the first place, you never found it by chance. But that was in my opinion not the reason it had to close down in the end.

Even though the shop was small and dark I actually liked it. They had lots of different roleplaying games on their shelves – from popular games like D&D to the more rare ones and even some pretty obscure ones. I could spend hours there leafing through game books I’ve never even heard about. But where there’s light there’s darkness.

One of the employees was a very grumpy fellow who usually told people that what they were buying was actually crap. His favorite target were people who actually bought one of the overpriced Games Workshop miniatures from them. It was also a really pain in the ass to get him to help you if you had a question. The other one was a more cheerful fellow but had the uncanny ability of driving female customers from the shop in no time.

Both of them were actually totally unable to order anything for you, so if they didn’t have the product you wanted in stock you could either buy something else or just return on another day in hopes they finally had it in stock.

When this shop went under another opened in another part of town. The shop’s interior was larger, better lit and much more friendly. But alas it had a lot of the same problems. The people working there were not that motivated and the word “service” was obviously not in their vocabulary. What annoyed the hell out of me was that they even tried to sell a couple of pretty damaged books for the regular price. I can’t remember that they ever gave you a discount on any damaged books and usually these books never sold because of this.

Don’t get me wrong, it’s not that I just wanted to get the price down. But I think it’s just wrong to trying to sell obviously used stuff for the full price. That’s just not very customer-friendly in my book.

Finally this shop closed after a couple of years and was replaced by a new one that opened just a few dozen meters away. Again you ran into the same issues: a staff that was unmotivated and didn’t know shit about what they were selling. You probably can already imagine how this story ends. Yes, one day this shop closed as well.

I really would love to support brick & mortar gaming shops, but hell they don’t make it easy for me. I am sure there are great game shops out there – with motivated employees who actually know what they are selling, who organize events, provide additional service (like participating in programs like Bits & Mortar), who order books for you and keep you informed about what’s new in gaming. But all the local game shops I’ve been in weren’t anywhere close to that.

So I am forced to buy everything online. The only thing I can do to support the little guy is to buy from online shops like Sphärenmeisters Spiele instead of relying on Amazon too much. Aside from that you can always support your favorite publisher directly by ordering from their own online stores (if they have something like that).

What do you think? Are brick & mortar gaming stores responsible for their own deaths? Or is it the fault of us gamers? Please share your comments below!